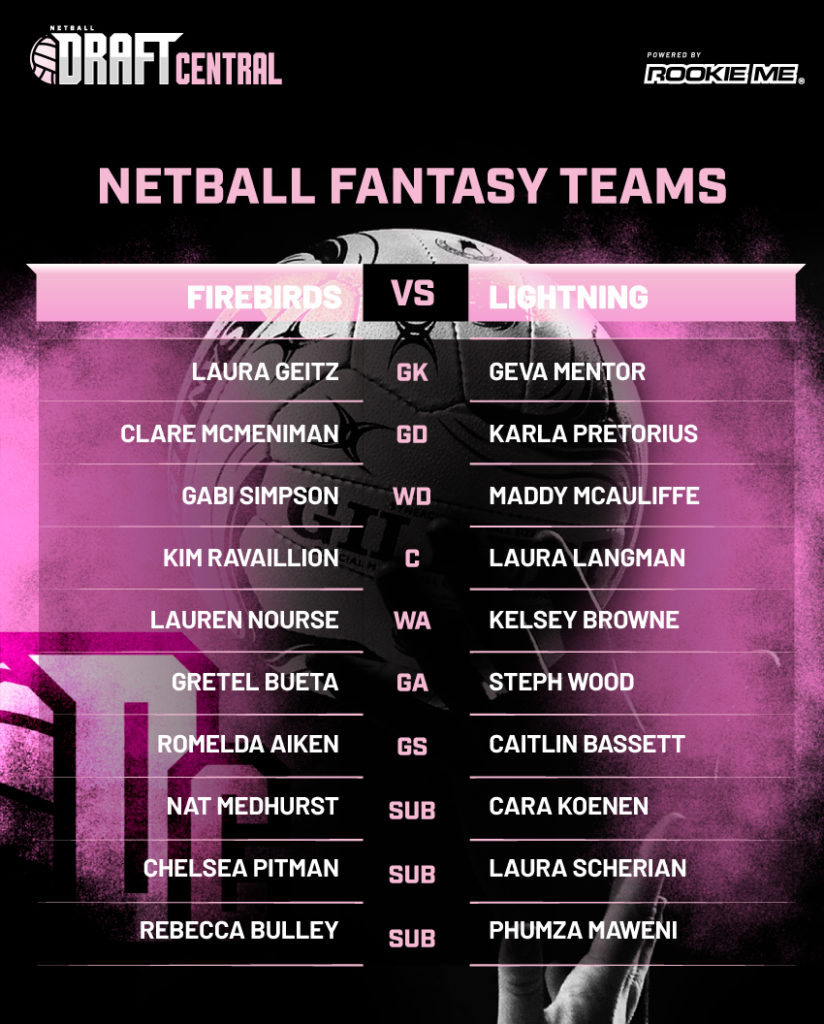 OVER the years there have been a multitude of stars pulling on the Firebirds dress and while the Lightning are still relatively new to the netball world compared to their state rivals, Sunshine Coast have had some A-list players come through the doors. Draft Central has comprised two teams filled with past and present players to create the ultimate Queensland rivalry line-up.

The Firebirds are one of the most successful clubs in netball history winning three ANZ Premiership grand finals but have struggled to have the same influence since the inception of Suncorp Super Netball. But that has not stopped a high calibre of players from gracing the court. It is no surprise former Firebirds and Diamonds captain, Laura Geitz gets the nod at goal keeper with the highly talented defender in a league of her own. Geitz was a key contributor the Firebirds’ continued success throughout the ANZ Championship with her impressive on court leadership, tenacity and cleanliness to attack the ball. Partner in crime Clare McMeniman takes out the goal defence position thanks to her impressive timing on court, ability to read the play and tagging style of defence. The two were renowned for their immense pressure over the shot, ability to switch things up in the defensive circle and undeniable attack. Current captain, Gabi Simpson is set to pull on the wing defence position with her sheer athleticism constantly on display. Her aerial skills and speed off the mark make her a tough opponent, while her strength around the circle edge adds another element to her game play. Although she made the move to the Magpies in 2017, Kim Ravaillion was a staple in the Firebirds line-up with the gut running centre well and truly leaving her mark on the competition, helping to push her side to grand final victory in 2016. Her good vision and delivery into the circle made her just about unstoppable from anywhere on the court consistently creating something out of nothing. Ravaillion’s high level of endurance, netball smarts and defensive pressure are heer most prominent attributes. In wing attack is none other than Lauren Nourse. The former Diamonds representative possessed some real class around the circle edge with her slick hands, quick footwork and solid positioning in the attacking third.  Moving into the goal circle is arguably one of the most dynamic duos netball has seen. Dynamo Gretel Bueta takes out the goal attack position with the 191cm shooter owning the goal circle with her energy and exciting game style. Bueta is no average goaler, willing to take on the contest and use her athleticism to outmuscle opponents time again. Her combination with Romelda Aiken is second to none with the two connecting seamlessly. Aiken has been a long-standing servant of the club with her commanding height, high volume of shots and relative accuracy doing wonders for the Firebirds. Throw in her ability to get up to the high balls and consistently deliver even under pressure and Aiken was a sure start. Unlucky not to get the starting nod is current Magpies goaler Nat Medhurst with the smooth mover an integral member in the squad’s earlier success while Roses wing attack Chelsea Pitman also finds herself on the bench. Rounding out the team is Rebecca Bulley and while she only spent a short amount of time with the club had an influence on court.

Despite only being around for three years the Sunshine Coast have played host to a number of international stars that have helped shape their impressive legacy. Much like their state rivals, the Lightning won back-to-back grand finals in 2017 and 2018 announcing themselves as true competitors. Although she has now departed the club, Roses star Geva Mentor was an easy choice to get the start at goal keeper. Standing at 191cm the defender oozes class and composure under pressure and is clean across the court able to manoeuvre around her opponent and force turnovers with her lanky arms. She is strong under the post and has an uncanny ability to read the play and disrupt the attacking flow. Arguably the world’s best goal defence, Karla Pretorius takes the bib thanks to her dynamic movement, go-go gadget arms, read of the play and ability to make something out of nothing. She is one of the most exciting defenders to watch with her unpredictable nature and attacking mindset constantly on display. Maddy McAuliffe pulls on the wing defence position with her defensive pressure and three-foot marking while New Zealand superstar Laura Langman takes the cake at centre. Langman is renowned for her impressive endurance, play making ability, change of direction and sheer athleticism. Her ability to sense the moment and stand up to the pressure is unfathomable consistently able to deliver the ball on a platter to the attackers while her defensive pressure to block the attacking forays makes her the complete package. Moving into wing attack is speedster Kelsey Browne and while she made the move to Collingwood her impact and influence throughout 2017 and 2018 was unquestionable. Her skill to persistently hit the circle edge, dart around the court and use her quick footwork to reposition made her hard to stop. Browne was a real pocket rocket for the Lightning connecting well with Steph Wood. The goal attack is a smooth mover, able to glide across the court and set up plays thanks to her spatial awareness and general netball nous and while she may not put up a wealth of shots, she has an uncanny ability to sense the moment and deliver. The goal shooter position goes to Diamonds captain Caitlin Bassett with the towering goaler a commanding presence under the post. Her long limbs, strong holds and consistency to put up a high volume of shots makes her a challenging prospect for opponents. On the bench is young up and coming star Cara Koenen who burst onto the scene last year with her strong movement, clean hands and accuracy to post while Laura Scherian takes out the midcourt position. Spar Proteas representative Phumza Maweni finalises the squad with her defensive pressure.

With star players in each position it is hard to separate both sides given the amount of game changers across the court, so it comes down to consistency, something the Firebirds line-up possesses. While the Lightning squad has more international flavour with representatives from New Zealand, England and South Africa the Firebirds boast a well-connected and experienced squad.

Who wins this All-Star battle of the Sunshine State?
Created with Quiz Maker