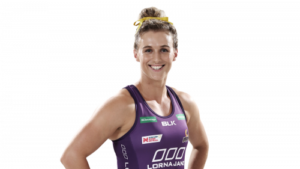 The relatively inexperienced defence end often look to their captain Gabi Simpson to pave the way for them. Her speed, athleticism and hands over pressure sets her well and truly apart from others. While her ability to take impressive intercepts at times of need is second to none. She can quite literally turn a game on its head with her impressive aerial leap and strong hands.

Simpson is always up for the tussle around circle edge, fighting hard to claim prime position and get a timely tip to disrupt the attacking flow. She is light on her feet while her dynamic change of direction makes her hard to match-up against. The wing defence often dictates the space in the defensive third with her mirroring movement and constant pressure. Simpson is one of the most durable players for the Firebirds and oozes composure and class with ball in hand. She is not often outmuscled around the circle edge thanks to her strength.