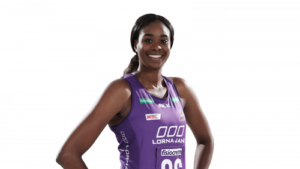 The Jamaican superstar shooter is set to play her twelfth season for the Firebirds. She has been a key member of the squad since the beginning with her athleticism, reach and volume to post. While her accuracy on the shot at times can be a bit shaky, there is no denying that the 196cm shooter can turn a game on its head with her ability to score quickly and her strength on the take.

Aiken is not afraid of the physical battle, consistently proving to be up for the challenge and has also shown her versatility switching ends throughout the 2019 season. Although not overly familiar with the goal keeper position the Jamaican import proved to be a handy option with her lean over the shot and circle positioning, but does her most damage under the post. Her ball control and balance on the baseline makes her one of the most commanding shooters in the competition.