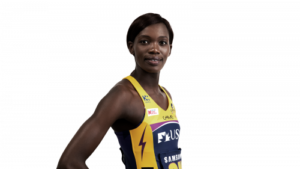 Maweni joined South African teammate, Karla Pretorius at the Lightning for the 2019 season and made her debut in the opening round. She was able to hold up her own against some of the world’s best shooters, and standing at 186cm, has the size to match it with a number of them. Her one-on-one work and aggression towards the contest was what initially caught the Lightning’s eye, with the 35-year-old signing from the Vitality Netball Superleague where she spent time with both Severn Stars and Loughborough Lightning.