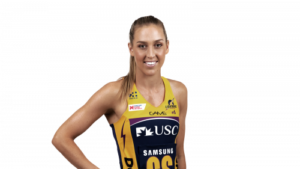 A future Australian Diamond and one who is earmarked as someone who could replace former mentor, Caitlin Bassett at international level, the 190cm goaler had a huge 2019. She was able to take over the role from Bassett, and team up well with Peace Proscovia in the goal circle, adding versatility to her game to play either shooter or goal attack. A shooter with good athleticism and an ability to fire from multiple places, Koenen adds and extra dimension to the Lightning’s goal circle.