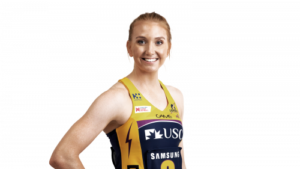 A defensive midcourter who has locked down a role at wing defence of late, has improved her game in between international stars, Laura Langman and Karla Pretorius. The nous and experience of the duo has allowed McAuliffe to learn on the job, and the 180cm Australian has a natural ruggedness about her game. She has been compared to Langman in many ways, and looks the obvious choice to replace the New Zealand veteran in centre in the coming years. She has represented the Diamonds at junior level and could be one who forces her way in with a couple of strong seasons.