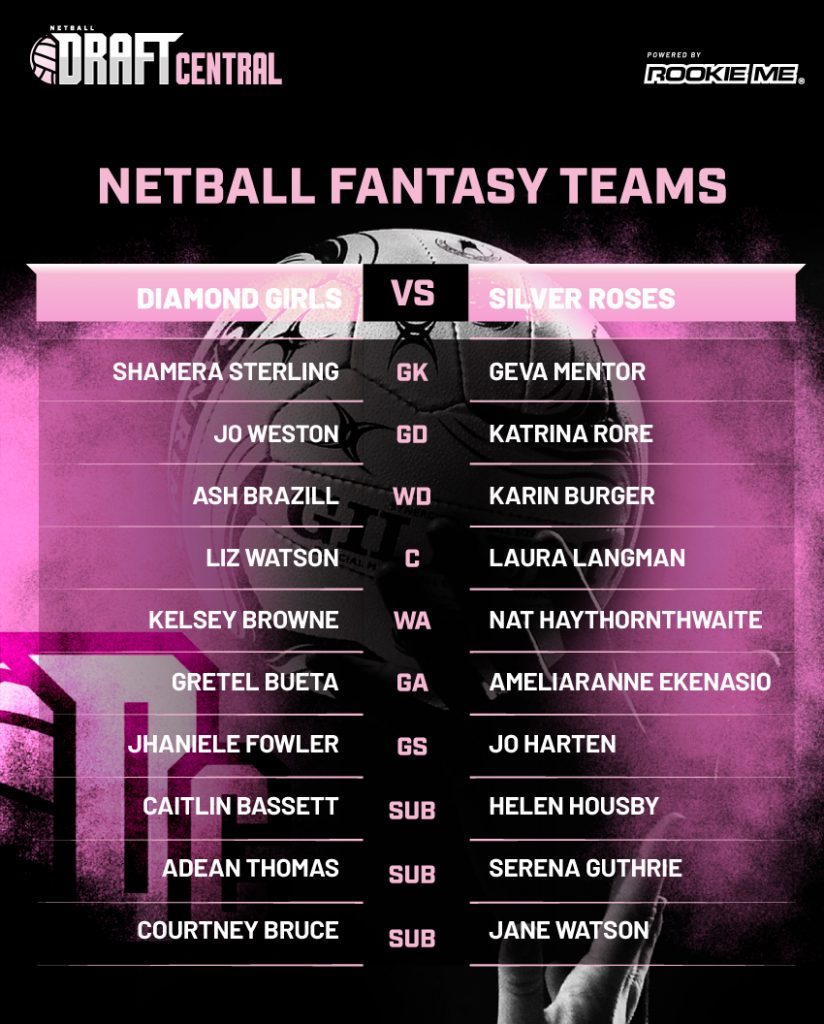 WITH a wealth of netball talent across the world Draft Central has created two teams based on the current top four nations according to the International Netball Federation rankings. The first team comprises of first and fourth – Australia and Jamaica – while the second team is made up of players from New Zealand and England. The line-ups include injured players that have recently featured in their respective country’s team.

The Diamond Girls are bookended by Jamaicans given their height and dominance in those respective positions. The defensive end is set to cause fireworks with the likes of Shamera Sterling taking out the goal keeper position. The exciting Jamaican goal keeper is renowned for her intercepting ability, impressive aerial skills and classy footwork to get up to the high balls and propel it back down the court. Australian Diamond, Jo Weston is set to pull on the goal defence position given her ability to shut down opposition goalers with her tagging style of defence and skill to block vision and space in the defensive third.

Through the midcourt it is Diamonds top heavy with dynamo Liz Watson taking out the centre position. Although she is more commonly seen in wing attack, Watson has proven that she has the endurance and skill to have an influence across all thirds and use her speed and precision passing to deliver into the goalers with ease. Speedster, Kelsey Browne takes out the wing attack position credit to her dynamic footwork to dance around the circle edge and exploit every inch of space. Her impressive vision and skill to vary her passes into the shooters makes her hard to stop when on song. Coming in at wing defence is Ash Brazill, with the Australian Diamond able to move into centre as well when needed. There is no denying that she is one of the most athletic midcourters in netball history with her aerial ability and speed off the mark.

In the shooting circle, it is a combination of twin towers with excitement machine, the unpredictable Gretel Bueta getting the nod at goal attack. She is simply unstoppable both in the air and at ground level able to gobble up everything that comes her way while her increased accuracy makes her even more of a threat. Bueta consistently uses her athleticism and strength to out-position defenders under the post and shoot truly. Jamaican shooting machine, Jhaniele Fowler takes out the goal shooter position thanks to her continued dominance, height, strong holds and high volume. Her ability to use her body and feet to ward off defenders is second to none.

Unlucky not to get the start is Australian captain, Caitlin Bassett who was just pipped at the post by Fowler while the likes of Adean Thomas through the midcourt and defender Courtney Bruce also just missed out.

There is no shortage of star power across the court for the Silver Roses with key players across each third of the court. Each player oozes class, experience and an innate winning ability. Starting down back is arguably one of the most experienced defenders and goal keepers in the world, Geva Mentor. The England Roses defender is in a league of her own, able to read the play and swat the ball away with her well-timed leaps and pressure over the shot. Moving out into goal defence is versatile New Zealand defender Katrina Rore renowned for her aerial presence and intercepting ability. She is light on her feet able to spring into action at any time and also possesses that attacking element to transition the ball from one end of the court to the other.

The defensive minded Karin Burger is another sure start for the Silver Roses with her impressive wingspan and quick change of direction. Burger proved to be a key cog for New Zealand able to direct traffic down back and can seamlessly switch into circle defence when needed such is her netball IQ. Her balance around circle edge ensures she remains a constant threat to force turnovers while in centre it is hard to go past the services of Laura Langman. The veteran Silver Fern is simply unstoppable able to run all day and everyday using her ball movement to open up the attacking end and deliver pin-point passes. Although she is more defensively minded able to apply pressure on the ball carrier and pick off intercepts her ability to switch into attack makes a never-ending threat. In at wing attack is England Roses midcourter and part-time shooter Nat Haythornthwaite. Although more commonly seen delivering the ball to the goalers with her clever placement around circle edge, quick footwork and hard drive to circle edge Haythornthwaite can slide into goal attack when needed.

The goal circle oozes nothing but class, shooting prowess and versatility with both able to switch between positions. Ameliaranne Ekenasio takes out the goal attack position with her smooth movement constantly on display while her ability to slot them from anywhere makes her an ominous threat for opposition teams. She is cool, calm and collected under the post and is not afraid to re-position to get into a more commanding spot while her ball handling skills is second to none. Much like her fellow goaler, Jo Harten can stand up and deliver long bomb after long bomb. Her ability to shake up her game style from a holding to a moving shooter keeps defenders on their toes.

Rounding out the squad is England Roses goaler Helen Housby along with teammate and defensive midcourter Serena Guthrie while Silver Ferns defender Jane Watson is the final piece of the puzzle.

Given the versatility of the Silver Roses it is fair to say that they have the upper hand over the Diamond Girls with each of their players able to move into another position with ease. The Silver Roses ooze dominance from the defensive unit right through the midcourt to the goalers, able to exploit the Diamond Girls especially through the midcourt.