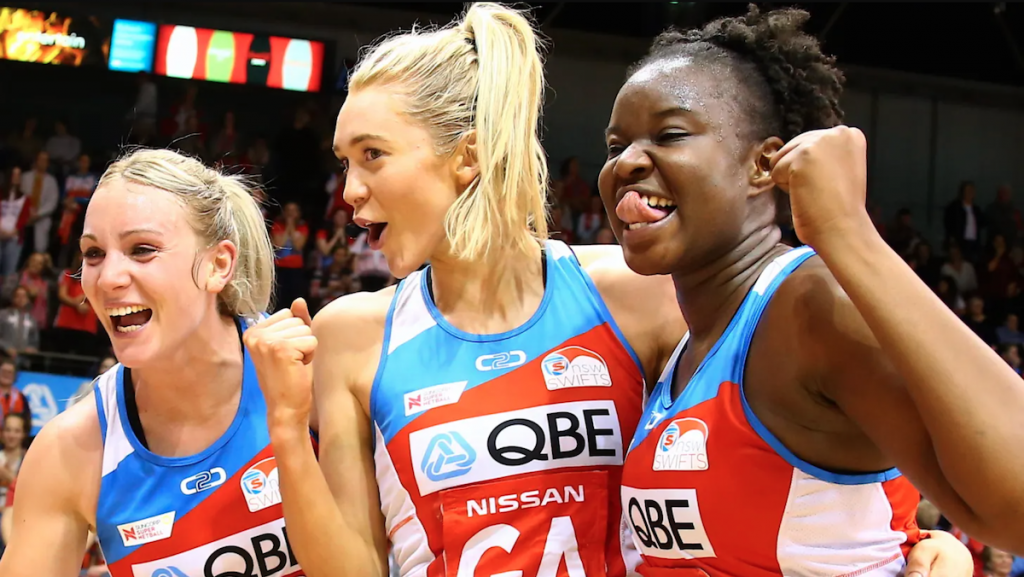 WITH netball taking a back seat to coronavirus in 2020, Draft Central is taking a look at memorable matches in recent history. Next up is NSW Swifts’ spectacular 2019 Suncorp Super Netball Grand Final performance against Sunshine Coast Lightning. Looking to make it three in a row, the Swifts put on a masterclass stopping the Lightning in their tracks and clinching their first premiership in over 10 years.

It was an impressive display from the Swifts, who came into the match as the underdogs despite spending a wealth of the season on top of the ladder. The Lightning had an impressive track record against the Swifts heading into the grand final, but that was all thrown out the window with New South Wales pouncing on every opportunity that came their way to blow the Lightning out of the water.

With youngster Cara Koenen getting the start over Peace Proscovia and Steph Wood struggling for accuracy, the hungry Swifts defensive unit of Sarah Klau and Maddy Turner switched it on from the starting whistle, gobbling up a wealth of ball between them. While Karla Pretorius had a similarly strong start, the Swifts were careful and patient with ball in hand and it paid dividends, heading into the second quarter four goals up thanks to the clean movement down court.

Sam Wallace proved she was in for a big one from the get-go, and while the Lightning put some solid pressure on the goal shooter defensively, she used her improved aerial ability to post 20 goals by half time and provide a constant threat – aided by Helen Housby who consistently evaded Pretorius to be a handy option inside the circle. With plenty of young talent running around through the Swifts midcourt, many wondered whether the experienced strength of Lightning livewire Laura Langman and speedster Laura Scherian would run them down. But that was not the case with the Swifts midcourt well and truly rising to the occasion, unfazed by the Lightning’s experience and instead doing what they do best, treasuring the ball and using their cautious approach to feed into the goalers. With Paige Hadley, Nat Haythornthwaite and Katrina Rore firing on all cylinders early, the Lightning could not seem to find purchase to steal momentum away, seeing the Swifts lead 31-23 at half time.

With rotations all around, the Lightning seemed to lack consistency especially in the goal circle, and with Hadley holding off an unusually quiet Langman there was not enough drive through the midcourt for the Lightning to pull back the margin. While many expected the Lightning to fire back heading into the second half, the Swifts did not let up and came out firing once more, not allowing the home side to generate any easy passage of play and establish their signature ball movement across the court, that many had gotten to used to seeing. Hadley and Haythornthwaite continued to ply their trade out the front, providing constant ball into the circle and despite the slower quarter the Swifts were still well and truly in control ahead of a massive final quarter.

The real turn in the game was in the final quarter, seeing the Swifts finally really pull away from the Lightning thanks to the defensive unit putting on a show and Wallace continuing to dominate under the post. Defensively, Klau was having a day out dominating the one-on-one contest, and the usually threatening duo of Pretorius and Phumza Maweni seemed to pale in comparison to the Swifts’ defensive prowess. A phenomenal shared final quarter effort saw Wallace, Housby and Sophie Garbin dominate the scoresheet, combining for 18 goals compared to the Lightning’s 11, with the reigning premiers unable to compare to the Swifts’ hunt across the court. With a final margin of 17 goals, the Swifts had come in hot and could not be matched, winning their first Suncorp Super Netball premiership and proving that trusting in their youth would continue to pay off after a rough season at the top.

Looking to the stats, Wallace earned a well-deserved Player of the Match award, shooting 40 goals at 91 per cent, followed by Lightning youngster Koenen with 23 at 85 per cent. Housby was consistent as ever with 18 goals, 19 centre pass receives and an intercept, while Proscovia racked up 16 goals in her 31 minutes on court. Swifts’ Haythornthwaite (21 assists, one intercept) and Hadley (20 assists) proved crucial through the midcourt, and while Laangman and Scherian similarly shared the feeding role (16 and 15 respectively) there just was not enough ball that reached their goalers to be a winning side. Defensively, Klau was spectacular with 10 gains (five intercepts, four rebounds and 10 deflections – one to advantage), and was aided well by partner in crime, Turner (two intercepts). Both Pretorius and Maweni put in a solid effort to combine for five intercepts, but it was not enough against the Swifts sharpshooters.