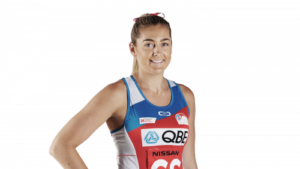 The NSW Swifts representative a key cog in their premiership tilt. Garbin stood up when the likes of Helen Housby went down with her leg injury, shouldering the load in her non-preferred position of goal attack. Her effort is unquestionable always putting in 100 per cent and using her strong movement to have an impact in the goal circle. Although she is not the fastest player on court her impressive vision and netball understanding sets her apart from fellow goalers coming up through the ranks. Garbin’s ability to change up her game style from a holding shooter to a moving one is also important with the youngster steadily learning when to pull the trigger. In terms of accuracy Garbin is not afraid to back herself from range while her split allows her to claim to pivotal space in the circle. Her connection with the likes of Nat Haythornthwaite and Sam Wallace will only strengthen her game and take it to the next level something she will be hoping to do if she is to make her way into the Diamonds squad after being named in the Australia A team.