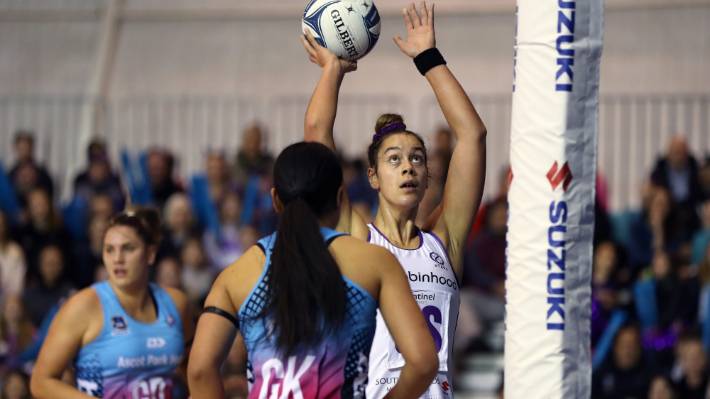 COMING off a difficult loss against the Mainland Tactix, the Northern Stars had no issue dominating the Southern Steel with a convincing 50-43 win. Uncertainty and a lack of connection in the Steel attack end, due to a string of unfortunate injuries, meant that a tenacious Stars defence were able to come out on top thanks to a strong first term. Despite their big win over the Mystics in Round 7, there were too many holes in the Steel game in this match, and they lacked their usual intensity against a clean and ferocious Stars outfit. The Stars broke a four-game losing streak and will secure themselves in fourth position on the ANZ Premiership ladder.

Kalifa McCollin was given the start at goal shooter for the Steel, with Kiana Pelasio slotting into McCollin’s typical goal attack role. McCollin had suffered an ankle injury in the previous round and the effect of this may have contributed to this position switch, giving her a little less running around to do. Due to these changes in their shooting end, Steel were relying heavily on Silver Fern Gina Crampton to have an outstanding game, to give them a chance at taking a win. The Steel got off to a shaky start and were not able to find each other easily or balance the space on the court. In contrast, the Stars came out of the blocks with plenty of punch in attack and set the tone for the game early. Grace Kara was combining well with Maia Wilson and Jamie Hume grew into the game in her supporting role. After a few soft turnovers from both teams, Kate Burley stepped up a gear notching up a rebound and then an interception within a few minutes. The Stars defence were getting the measure of the Steel attack, with Pelasio unable to convincingly draw the defenders away from McCollin under the post. Another gain from the Stars, this time from Mila Reuelu-Buchanan and they made no mistake at the post, sneaking out to 10-6 midway through the first quarter.

An early change saw Kendall Corkery replace Georgia Heffernan at wing defence, but the Steel were not managing to convert their turnovers and were wasting ball in attack. Another four-goal run for the Stars saw them extend their lead to 16-7 at the first break. Stars were totally in control, creating plenty of opportunities for themselves and forcing the Steel into making silly errors, then capitalising at the post. Steel had eight turnovers in the first quarter and felt compelled to make a change at quarter time. Heffernan was matching up well against Stars captain Kara but ended up replacing Shannon Saunders at centre, a switch-up we have not seen much of at all this season. Ellen Halpenny also slotted into goal shooter with McCollin moving out to goal attack where she seemed more comfortable. These changes had a good impact for the Steel and they managed three in a row to start the second quarter. The Stars were able to regroup and regain control as the quarter progressed, and flooding the middle channel to force a long ball was proving very effective for them. Another gain from Burley took her total to three intercepts and the Stars restored their healthy seven-goal lead.

The midcourt battles were shaping up nicely, with both teams evenly matched in the centre third. Corkery was scrappy; squaring up to Kara and doing her best to keep her away from circle edge, while Heffernan’s defensive prowess was earning the Steel some much-needed turnover ball. With more minutes in centre at this level, her feeding confidence and ball release will improve and she could be a very handy option for the Steel midcourt. Lisa Mather was working hard on Crampton, but the experienced wing attack had the measure of her opposition and was growing into the combination with McCollin and Halpenny. After a much improved quarter from the Southern side, the teams headed into the break with the Stars leading 26-19.

With the defensive end on fire, and Maia Wilson shooting at 100 per cent, it is no surprise that the Stars were still holding onto a solid lead. They were playing like a team that backed themselves to win, and the Steel just were not creating enough opportunities for their attackers. In terms of penalties, Steel were on 29 by half-time, with over 15 of these given to Taneisha Fifita. This released all the Steel defensive pressure, giving Wilson numerous free shots to the post. Te Huinga Selby-Rickit was not managing to have her usual impact on the game, and the Steel really needed someone to lift them and provide an energy boost. The Stars kept grinding away, with the speed and slick movement through their midcourt leaving the Steel defenders behind them. In a much-needed switch up, which possibly could have come a little earlier in the game, Fifita went to the bench with Selby-Rickit taking on Wilson in the goal keeper position and Abby Erwood providing a new look at goal defence. Crampton pulled off a fantastic interception at the transverse line and this seemed to be the spark the Steel needed. They went on a three-goal run with Halpenny continuing to demonstrate her reliability and experience at the post. However, the attempted comeback came too late and Stars were able to maintain an eight-goal advantage going into the final term.

With the final quarter underway, the Steel looked as though they would be happy to settle for a bonus point. They lacked speed and anticipation in their defensive end and were struggling to keep up with Wilson and Hume. They were showing patches of good play, with Mather doing a heap of work transitioning the ball down court and the attack end finding some rhythm, but they still have a lot of work to do going forwards. Through the midcourt, the Steel were able to disrupt play, but their circle defence was far too flat and quiet against the likes of the prolific Maia Wilson. Despite a late run of goals from the Steel, the Stars kept them at bay with a seven-goal win, denying Steel a bonus point once again.

Standouts from the game have got to be Kate Burley and Kate Heffernan, each claiming three intercepts and Heffernan coming into her own at centre. It is also hard to look past Maia Wilson shooting at 100 per cent, who earned herself a well-deserved MVP award. Both the Steel and the Stars will take on the Magic in their next game, giving them the chance to consolidate the good patches from today’s game and strengthen connections as the regular season draws to a close.