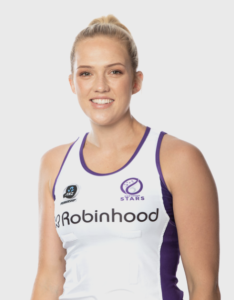 Crossing from the Stars’ northern rivals the Mystics, Jamie Hume provides a strong option in the attacking goal circle. She stands at 182cm and only just turned 24 as she approaches the peak of her career. She represented the Silver Ferns at both Under 21s level, and was a part of the successful Fast5 Netball World Series in 2016. In 2019, Hume managed 74 goals from 131 attempts – an area of improvement – but was also often the one feeding it into the goal shooter, and will be hoping with greater opportunity comes greater confidence when taking the shot.