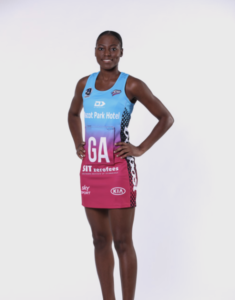 There is no denying that McCollin is an unknown quantity for opposition teams with the new recruit set to light up the court with her natural flair and unpredictability. The Trinidad and Tobago goal attack has speed to burn and uses that dynamism to insert herself on the contest and in the goal circle. Standing at 180cm she is not the tallest shooting option but she does not let that stop her resorting to her netball smarts to dart around the court and receive the ball in damaging positions. She knows what it takes to perform at the highest level competing in the Netball World Cup and Commonwealth Games while also leaving her mark on the Vitality Netball Superleague (VNSL).