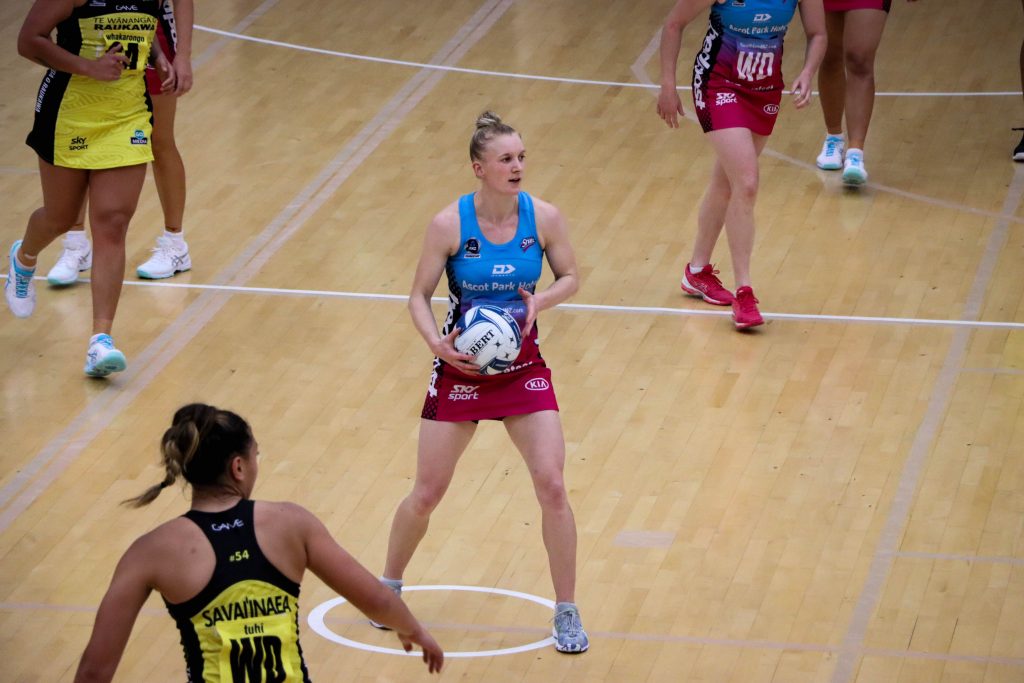 NEW Zealand netball sensation Shannon Saunders has doubled as an essential worker throughout the COVID-19 outbreak with the Southern Steel midcourter focusing on her job as a pharmacist throughout the pandemic.

“I’m probably lucky because I’m classed as an essential worker in New Zealand because I’m a pharmacist, so I’ve still got to do a wee bit of work and get out of the house and kind of help the community a wee bit in that instance,” she said.

Saunders has got the balance between netball and being a pharmacist down to a fine art with the highly touted midcourter working both jobs throughout the standard netball season.

“It’s definitely challenging and yeah I don’t do as much pharmacy work now as I used to, but yeah I try and get a couple of days in throughout the week if I can. I do a bit of individual training, I’ll do it before and after work and then can just turn up to team training which is good so they allow me that flexibility to be able to do a bit of both which is nice,” she said.

While Saunders has been kept busy over the counter, she has not skipped a beat off the court, training hard in isolation and resorting to other measures to stay fit and active in isolation.

“Yeah so our trainer was pretty good and kind of gave us the structure of what they need us to do but also gave us flexibility to kind of mix it up day to day,” Saunders said. “But just trying to keep lots of running involved and as we’ve gotten closer to coming out of lockdown we have done more change of direction and more court specific stuff.

“Then just whatever weights you can do at home really. “I’ve got a little bit of equipment so just trying to maintain as much strength as possible but we are quite realistic that it is not going to be the same as if we were in the gym.”

Renowned for her silky ball movement the centre has been a permanent fixture for the Steel across the past nine years and played a key role in pushing her side to the finals last year. Although they bowed out in straight sets, Saunders was pleased with their efforts, but is aware that 2020 will look different and could be very taxing on the players given the amount of travel.

“Now that the draw has changed we now have to fly to Auckland every week for 10 weeks so that’s going to be challenging in itself because we are both placed in two places. We are about two and half hours apart so we travel a lot anyway to train together as a team and then having to fly to Auckland is going to be pretty tough. But it is just exciting that the competition is going ahead,” Saunders said.

“Some of the other teams can fly home after a game and all that whereas we can’t. We always have to stay and that kind of drags it out a bit more and limits our ability to train as a team. But we are used to always having to travel, so we just get on with it.”

The Steel have had a shake-up to their 2020 roster with Silver Ferns goaler, Te Paea Selby-Rickit departing the club and Trinidad and Tobago goal attack Kalifa McCollin coming into the mix. With plenty of speed to burn and an element of unpredictability about her, Saunders has quickly adapted to the new look line-up.

“We’ve got a wee bit of a different team this year so I think we are just building on the new connections and combinations that we have and just trying to put out a really solid performance this year,” she said.

“We are lucky we have got Kelly (Kalifa McCollin) from Trinidad and Tobago, so she’s stepped into those shoes and I think it’ll be interesting to see how she’s been going over lockdown because she’s such a long way from home and it’s been so good of her to stay over here and kind of commit to the team. But she adds that bit of flair to us and she’s super quick and just adds a different dynamic to what we are used to,” she said.

With a fresh season also comes new opportunities, with young wing defence Kate Heffernan vying for more court time and hoping to have a lasting impact on the competition.

“She’s that little bit more confident and sure of herself as a player and I think that is really kind of showing out on court when we’ve been training so I’m excited to see how she builds this year,” Saunders said.

Standing at 174cm, Saunders uses her speed, dynamic footwork and spatial awareness to have an impact in the attacking third. Her partnership with fellow midcourter and wing attack, Gina Crampton is arguably one of the most threatening duos in the ANZ Premiership having played together for the past 10 years and at an international level. The two can make something out of nothing and create space seamlessly such is their class.

“I think we just know each other inside and out and I know what she is going to do before she probably does it and then we also have a great relationship where we can have those conversations,” she said.

With the ANZ Premiership set to recommence in less than a month it’s full steam ahead for Saunders who is excited but is also harbouring a couple of nerves ahead of the restart.

“I’m a little bit nervous,” she said. “I feel like, I’m like do I know how to play? But I think once we get back out there and just that competitiveness and excitement when it’s a tough close game and that physicality as well I’ve really been missing.”