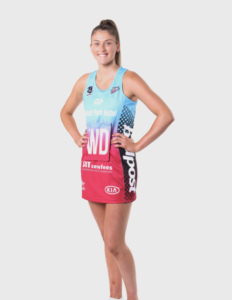 Joining her twin sister but through the midcourt, Kate Heffernan oozes just as much potential and has showcased her ability to have an influence at ANZ Premiership level with a couple of strong performances already. Yet to turn 21, Heffernan is strong through the midcourt able to move between centre, wing attack and wing defence such is her composure, netball nous and skillset. Standing at 181cm, the midcourter is on the taller side of centre court players and uses that to her full advantage with her hands over pressure creating turnovers especially when in wing defence. Although typically a centre, Heffernan made the switch to wing defence with ease using her quick footwork and long arms to cause havoc for opposition attackers.