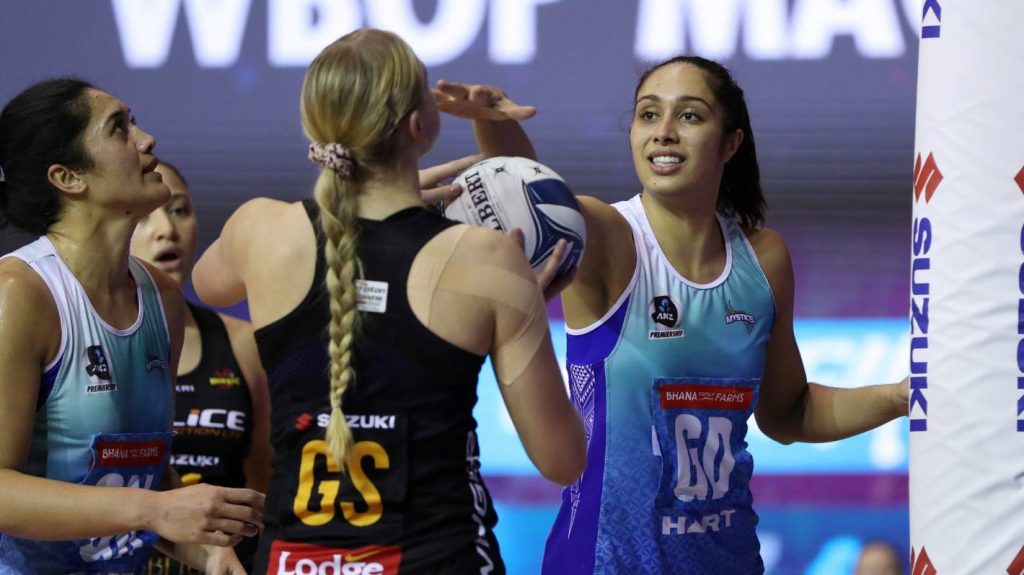 WITH both the Waikato Bay of Plenty Magic and Northern Mystics coming into the last match of ANZ Premiership Round 7 off the back of frustrating losses, both teams came out with a fire in the belly in a must-win for the Mystics. The fading Magic are still yet to get a win on the board since the return of the season, with the Mystics bouncing back well to defeat Magic 45-39.

The Mystics may have put out a disappointing performance on Sunday night but had a fire in the belly and were ready to fight for a win from the get-go. A lack of communication across the court for both sides led to a mostly untidy start from both teams, with the Magic benefiting off uncharacteristic Mystics errors and with some indication now of how to shut down Grace Nweke and Peta Toeava aiding in winning ball back.

Magic’s defence was on from the first whistle, forcing errors from the usually confident Mystics. With Asher Grapes getting the start in goal attack but thus far in 2020 not having a huge impact on the scoreboard, the likes of Erena Mikaere and Georgia Tong put the pressure on Nweke to limit options at goal. With defenders all over Nweke, hesitance on the feed saw the Magic pick away air ball, with Mikaere starting strong at one end and youngster Khiarna Williams holding up well at the other.

Making her first ANZ Premiership start, 17-year-old Williams impressed early and held up well in attack, with her shorter height and speed seeing a solid combination between her and Abigail Latu-Meafou with a moving circle paying dividends early. While both sides were applying a wealth of defensive pressure, the lack of offensive pressure from both sides saw a low scoring and relatively even first quarter. Both were inaccurate for the most part in the beginning, though the two teams settled into the game well for 11 goals apiece at quarter time.

But the Mystics switched on the defensive gears in the second, with Sulu Fitzpatrick out hunting and forcing slower ball movement and resets from the Magic to limit avenues to circle edge. A held ball call and a couple of timely deflections from Fitzpatrick and Phoenix Karaka saw the Mystics gain the upper hand, though their frequent errors and lack of support from Grapes in goal attack kept the Magic within touching distance.

A couple of confident feeds from Toeava kept the Mystics ahead but with plenty of drive the Magic were still in it, attacking every ball and doing their bit across the court to force errors from the Mystics. Nweke began to gain the upper hand towards the end of the quarter, finding much better control of the space against Tong and benefiting off Grapes drawing Mikaere out of the circle. Ahead by three goals at half-time (24-21), the Mystics could not afford to take the foot off the accelerator in the second half.

The second half saw huge circle changes from both teams, with Magic tall timber Kelsey McPhee sitting at the post and the unafraid Filda Vui assisting Nweke in goal attack for the Mystics. The changes made by both teams saw immediate benefits, with both teams having a bit more freedom across their attack units and fresh connections seeing the see-sawing affair continue. While both teams took some time to work into the new connections, the Mystics began to take control midway through the quarter, applying a wealth of defensive pressure to extend to a six-goal lead.

A plethora of defensive changes for the Magic midway through the term saw the Magic steal back some of the lead, with Mikaere switching into goal keeper and immediately forcing a missed shot from Nweke. While still playing a moving circle, the Magic attack opened up a fraction with McPhee adding a crucial tall option but still seeing plenty of rotation as Latu-Meafou worked the circle around the creative movement of Whitney Souness and Sam Winders. An unexpected switch up in attack by the Mystics saw Vui leave the court for Saviour Tui with just a few minutes left on the clock, adding another layer in attack as the Mystics well and truly ran away with an eight goal margin at the final change.

Fitzpatrick continued to have a flyer, dominating and not allowing McPhee an inch of space, but so did Mikaere who was crucial deflecting shots on goal, with her timing and elevation allowing her to bat away Tui’s attempts at the post. Changes continued to rain on both sides, with a highly physical contest seeing the Magic inch back the margin but unable to really take back control in the dying minutes, leaving their comeback too late and going down by six goals, 45-39.

Player of the match Toeava was a key difference in this one, plying her trade with ease and racking up 23 goal assists from a whopping 43 feeds, using her speed to reposition and open up space in attack. For the Magic, Souness was just as impactful with 21 from 46 and was also a force to be reckoned with at the centre pass with 21 receives. All three Magic goalers were fairly accurate, with Latu-Meafou (17 goals from 21 attempts), McPhee (12 from 14) and Williams (10 from 13) plying their trade but putting up 12 less shots than the Mystics.

Both Vui and Tui had much more impactful games than their output suggests, putting up four and two goals respectively but drawing attention away from Nweke at the post. Nweke was down on her usual accuracy with 39 goals from 47 attempts at 83 per cent, which was well and truly down to the work rate of Magic’s Mikaere who racked up two intercepts, a pickup and a rebound alongside her four ungathered deflections that put doubt in the Mystics’ minds. Up the other end, Fitzpatrick was consistent as ever with two intercepts and two deflections and was miles cleaner than Mikaere (18 penalties) with just six to her name.