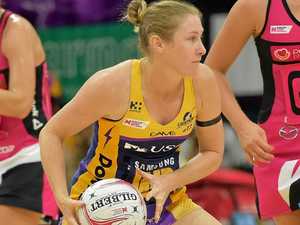 TWO time premiership player Jacqui Russell is no stranger to finals playing with both the Queensland Firebirds and Sunshine Coast Lightning in 2011 and 2018 and with another finals campaign about to start will be looking to add another to her collection.

But Russell’s journey has had plenty of ups and downs. After winning the premiership with the Firebirds in 2011, Russell’s netball journey took a different turn, stepping away from the game and moving to England to pursue her dreams while also getting her teaching degree. Despite all the changes, one thing remained the same her love for netball.

“My plan was always to come back and get back into the ANZ Championships as it was called at the time of course being a bit young and cocky thinking whatever I wanted to happen would happen and it didn’t really pan out that way” she said.

Unfortunately, she was struck down with injury during her hiatus breaking her leg and subsequently forcing her to take the long route back to the top. But her desire to play never faulted with the talented midcourter working hard to give her a fighting chance to get back to the highest possible league.

“I did spend a bit of time playing in the state league and in the national league which are both still very good competitions were not really where I wanted to be playing I guess,” she said.

But after spending years plying her trade at the lower levels, Russell doubted her chance of making it back to the top level of netball.

“I think it was pretty safe to say I had given up hope of playing back at the sort of professional level,” she said.

After coming in as a replacement player last year for the Lightning, Russell landed on her feet making an immediate impact on the side with her defensive pressure, offensive drive and commitment to the team.

“It was almost by chance I think that I ended up getting a go with Lightning in the end and it was really I think because of my connection and relationship with Kylie Byrne the Assistant coach that I have known since I was sort of 15 or 16. It just so happened that they needed to fill a void in my position,” she said.

Staring down the barrel of another premiership, Russell is unfazed by the so called “minor premiership curse” with the Lightning wing defence backing her side to get the job done and go back-to-back-to-back ultimately making them the only team in Suncorp Super Netball history to win a grand final.

“I think another trend in the past couple of years of Suncorp Super Netball is that Lightning have won and I’m thinking that, that will be the trend that continues rather than minor premiership curse,” she said.

To hear the whole chat with Jacqui Russell tune into our Centre Pass Podcast below or listen on Spotify, Apple Podcasts or other podcasting platforms.