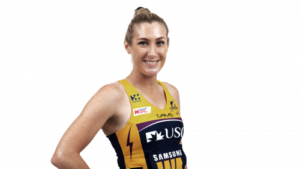 A player in the Suncorp Super Netball who found a second burst of life when she replaced Sarahpheinna Woulf in early 2018 after Woulf suffered a season-ending injury. Originally Russell’s career at the elite level dates back to a decade ago where she represented the Firebirds, but also spent a portion of her career in England. Sharing the wing defence spot with Maddy McAuliffe and working between Karla Pretorius and Laura Langman, Russell provides that reliable presence in the defensive half and is a consistent performer when given an opportunity.