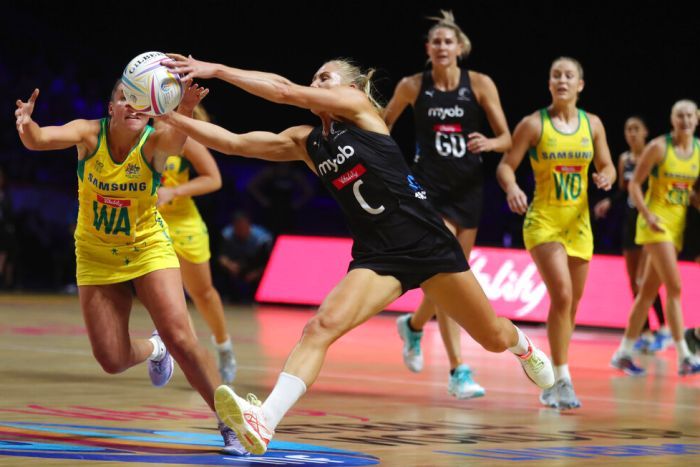 AUSTRALIA and New Zealand have been locked in their fair share of battles throughout history so Draft Central has combined the ultimate fantasy team combining players from the 1990 era to now. With a host of star players littered across the court it is hard to determine which country has the upper hand given both sides ability to turn a game on its head with their explosiveness and ability to do the unthinkable.

Over the years the Diamonds have had a multitude of a-class players take the court none more than the legendary Sharelle McMahon. The Bendigo born shooting prodigy was one of a kind with her smooth movement and strong drives consistently on show while her ability to hit the scoreboard with ease was another feature of her game. Goal attack, Gretel Bueta however, has a very different approach. The unconventional shooter is renowned for her explosive power, speed and towering height. She has developed into arguably one of the Diamonds most important assets given her influence on the court. Classy, wing attack Kim Green is another handy inclusion in the hypothetical side with her bullet like passes and ability to stop on a dime a key feature of her game. Her physicality and hustle sets her apart from other midcourters while the likes of Natalie Bode is a more consistent and tempered centre. Renae Ingles has been one of the Diamonds key contributors with her long arm span causing all sorts of havoc for attackers thanks to her ability to block their vision into the circle. Her deceptive speed, quick reactions and intense defensive pressure creates opportunities for turnovers time and time again. Although she is typically a goal keeper, Laura Geitz was too good to sit on the bench and has spent some time throughout her career out in goal defence. Geitz was one of the most exciting defenders to watch given her tenacity and ability to sense the moment and take a big intercept that would change the court of the game. The former Diamonds captain oozed nothing but class, composure and netball smarts always able to muster up something to disrupt the flow in attack. Fellow defender, Liz Ellis was similar consistently able to get hands to ball and force a turnover. Ellis will go down as one of Australia’s most prominent netball figures leading her country to World Cup glory. Geitz’ partner in crime Claire McMeniman made the bench thanks to her attack on the court and ability to shut players down with her tagging style of defnce while through the midcourt the likes of wing defence Julie Corletto made her way into the team. In the shooting circle, it is hard to go past Cath Cox with the talented shooter able to score from anywhere in the circle and put up a hefty total.

It is hard to deny that the Silver Ferns had one of the most prominent and damaging shooters that netball has ever seen in Irene Van Dyk. The talented South African come New Zealander guided her side to many famous victories over the Aussies thanks to her cool calm and collected approach to the post plus her ability to hold space directly under the post. In the goal attack position, Maria Folau was renowned as the long bomb shooter able to slot them with her heels flapping on the edge of the circle. Folau was one of a kind, consistently backing herself from range and able to inflict pain with her silky shot and clever movement around the circle. In the centre it is hard to go past the talent which is Laura Langman. The gut running midcourter is in a league of her own able to run all day and night often exhausting opponents and using her high netball IQ to slice through opposition defences. While her attacking is high class so too is her defensive work able to take match winning intercepts thanks to her endurance and class. Joline Henry was part of the furniture down back for the Ferns able to seamlessly rotate between wing defence and circle defence to provide a point of difference for New Zealand. But the combination of Katrina Rore and Casey Kopua has been one for the ages with the two creating a formidable duo time and time again. Just like fine wine, the two got better with age given their understanding and intense pressure to force turnovers or go out hunting for cross court balls. Their arms over pressure in the circle is a key attribute causing hesitation and held balls. On the bench the likes of Catherine Tuivaiti, Julie Seymour and Leana de Bruin were all great servants to the Ferns. Tuivaiti was often brought on as that impact player under the post able to hold her own and shoot accordingly while Seymour was recognised as one of the greatest centres of all time. Defensively de Bruin was a mastermind able to create something out of nothing.

History would suggest that the Aussies should take the honours given that since 1990 the Diamonds have won five World Cup titles against their Trans-Tasman rivals along with three Commonwealth Games gold medals, in which each of the aforementioned players had a monumental impact in. However, the games have been close in each of these encounters with a mere goal separating both countries at times showcasing just how stacked both sides are. Considering Australia’s defensive edge it would be fair to tilt the scales slightly in their favour but the combination of Van Dyk and Folau is one to be enviable of.