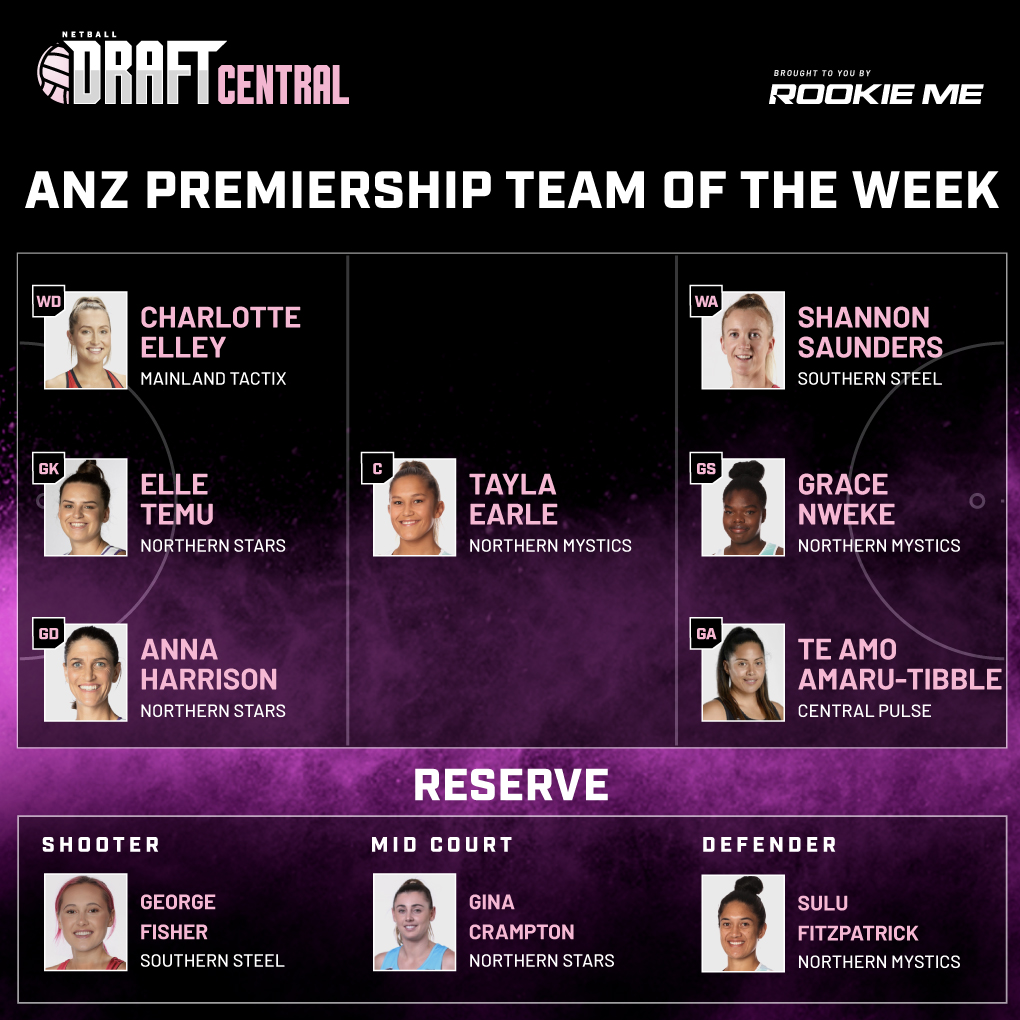 THE final round of the home and away season in the ANZ Premiership brought some close shaves and one big blowout. But even in that, there were a number of key standout performances with the winners from Round 15 in the Northern Mystics, Southern Steel and Northern Stars dominating the Team of the Week.

Starting inside the goal circle it was hard to go past Grace Nweke with the goal shooter once again dominating to post. The 19-year-old only continues to get better with time and this performance was no different as she commanded the ball inside the circle and held off two Silver Ferns defenders to control proceedings. Her footwork paired with her aerial ability had the defence in all sorts of trouble as she slotted a whopping 49 goals from 51 attempts at 96 per cent. Central Pulse shooter, Te Amo Amaru-Tibble gets the nod in at goal attack in this Team of the Week with her cool, calm and composed nature keeping her side within striking distance. Her spatial awareness allowed her to drive into the space and be an option inside the ring while her accuracy was on point draining 21 goals straight.

Through the midcourt, Southern Steel wing attack Shannon Saunders gets the nod. She was nothing but consistent and crafty with ball in hand throughout the match as she patiently directed traffic. Her netball nous and experience was on full show as she carefully crafted the attacking forays racking up 22 goal assists along with a whopping 31 centre pass receives. The centre bib fell to Tayla Earle with the Northern Mystics midcourter using her change of pace and dynamic movement to have an impact up both ends of the court. She stepped up to the plate when changes were made for the Mystics using her read of the play and strong hands to snatch ball out of the air and hit circle edge with precision. Although it was not a stats stuffing performance by Charlotte Elley the wing defence starred with her work off the ball to keep her opponent away from the play and nullify her influence. Her constant hustle and niggle around circle edge combined with her three-foot marking allowed her to mount pressure and force errors aplenty.

Just like a fine wine, Anna Harrison only continues to get better with the goal defence putting on a masterclass in her last outing for the season. Harrison was involved in just about everything from the get-go with her long limbs causing a ruckus in defence. Her timing was second to none while her elevation also enabled her to reel in ball after ball. The goal defence ended up with a ridiculous eight intercepts and five gains to her name highlighting her overall dominance. Speaking of overall dominance, partner in crime Elle Temu takes out the goal keeper spot after putting together a stellar performance. Her ability to use her outside arm and cleanly contest ball was front and centre throughout the game as she consistently won ball back racking up five intercepts and three gains.

George Fisher has once again made her way onto the bench with the England international proving to be a stalwart with her composure and accuracy to post. she is joined by the likes of Northern Stars wing attack Gina Crampton who provided a steady head in a constantly changing attack unit while Sulu Fitzpatrick also impressed for the Mystics in their win.