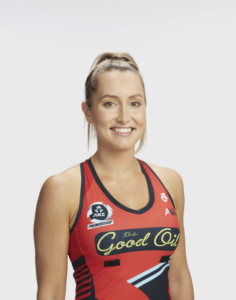 Entrenched in the Tactix’ defensive midcourt, Elley is a versatile player who uses her court smarts and skill to advantage. She has come through the New Zealand Secondary Schools sides, and was vice-captain of the Under-21 Silver Ferns side that took home the 2017 Netball World Youth Cup. Last year Elley stepped up in wing defence and was able to rack up a number of intercepts and force turnovers from opposition players.