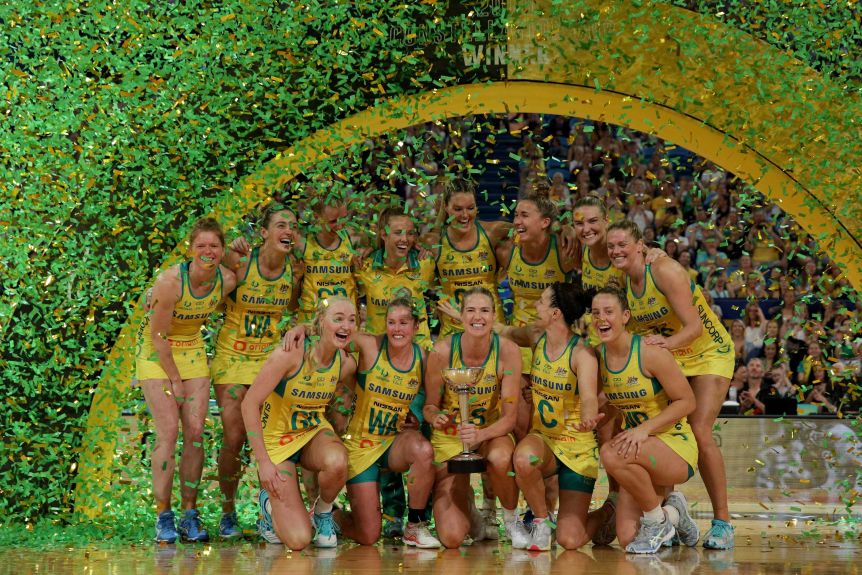 DESPITE not winning the past two major tournaments in the netball calendar Australia still sit pretty at number one in the world rankings. Last year, arch rivals New Zealand pipped Australia at the post with a thrilling one goal win at the Liverpool World Cup while England also reigned supreme in 2018, crushing Australian hearts in the gold medal match of the Commonwealth Games with a one goal victory. While international netball is uncertain at the moment given the COVID-19 outbreak, expect plenty of a-class clashes between the top nations when it returns. But with so much player development and new coaching techniques coming through, the top spot could change in the next twelve to eighteen months. Who will be number one netballing nation by the end of 2021?

With the number one spot sewn up, the Diamonds are primed to continue their reign at the top of the netball ladder. They are almost 30 points ahead of their next competitor showcasing their sheer ability to dominate opposition countries and win comfortably. The Diamonds are renowned for their clinical style of play and will be hoping to extend their lead over the other nations and hold onto top spot for years to come. The next layer of young up and coming players such as Jamie-Lee Price, Maddy Turner and Sarah Klau are already filtering through the camp giving the Diamonds plenty of hope for the future. The Diamonds have a couple of aces up their sleeve to remain at the top of the ladder with goaling sensation, Gretel Bueta one of them. Bueta has taken the world by storm with her explosiveness and unpredictability both under the post and across the court while the likes of Liz Watson and Courtney Bruce have become staples in the line-up.

Fresh off a World Cup win, the Ferns have well and truly re-established themselves as a netball powerhouse. After undergoing somewhat of a rebuild in 2018, the Ferns look bigger and better than previous years with stars across the court. According to the current international netball world rankings the Silver Ferns are just ahead of England but are still a distance away from the top of the table Diamonds, though that will not stop them from taking a swipe at the coveted position. Unfortunately, the Ferns have already said goodbye to some fan favourites in Maria Folau and Casey Kopua who have been key contributors for ten-plus years given their on court prowess and sheer dominance, while it could be argued that veteran Laura Langman is on her last legs, meaning the Ferns will have to strike soon if they are to take out that prime position. Under the guidance of Noeline Taurua the Ferns have developed into a formidable outfit renowned for their discipline and pin-point accuracy, something that will go a long way in helping their climb up the ladder, not to mention the wealth of depth they have coming up through the ranks in the ANZ Premiership.

With an ageing team, it is really now or never for the England Roses to reach the top and cement themselves an a-list team. They have well and truly found their form in the past couple of years taking out the 2018 Commonwealth Games and showcasing their impressive form throughout the Nations Cup. With a host of their stars and starting seven heading towards the twilight of their career such as Geva Mentor, Jo Harten and Serena Guthrie, the Roses will have to throw everything they have at New Zealand and Australia to make a serious assault on prime position in the world rankings. Only sitting two points behind the Ferns, England definitely have the firepower to overtake New Zealand and if they continue on their winning ways could take the crown from Australia.

The Sunshine Girls have come along in leaps and bounds thanks to a host of their players joining the likes of the Suncorp Super Netball, Vitality Netball Superleague and ANZ Premiership to help further develop their craft. It is almost unheard of to even consider Jamaica as a potential number one nation but it is not impossible given they are only one point behind England and have some key players that can single handedly change the course of a game. With towering and prolific shooters, Romelda Aiken and Jhaniele Fowler at their disposal, Jamaica could rise up the ranks or at least challenge those above them. Throw in highly touted and exciting young defender Shamera Sterling along with goaler Shimona Nelson and the Sunshine Girls have a very bright future which puts them in good stead to mix it with the best and take out the number one spot.

*Note: For a full breakdown of how rankings are established, check out the International Netball Federation rankings.