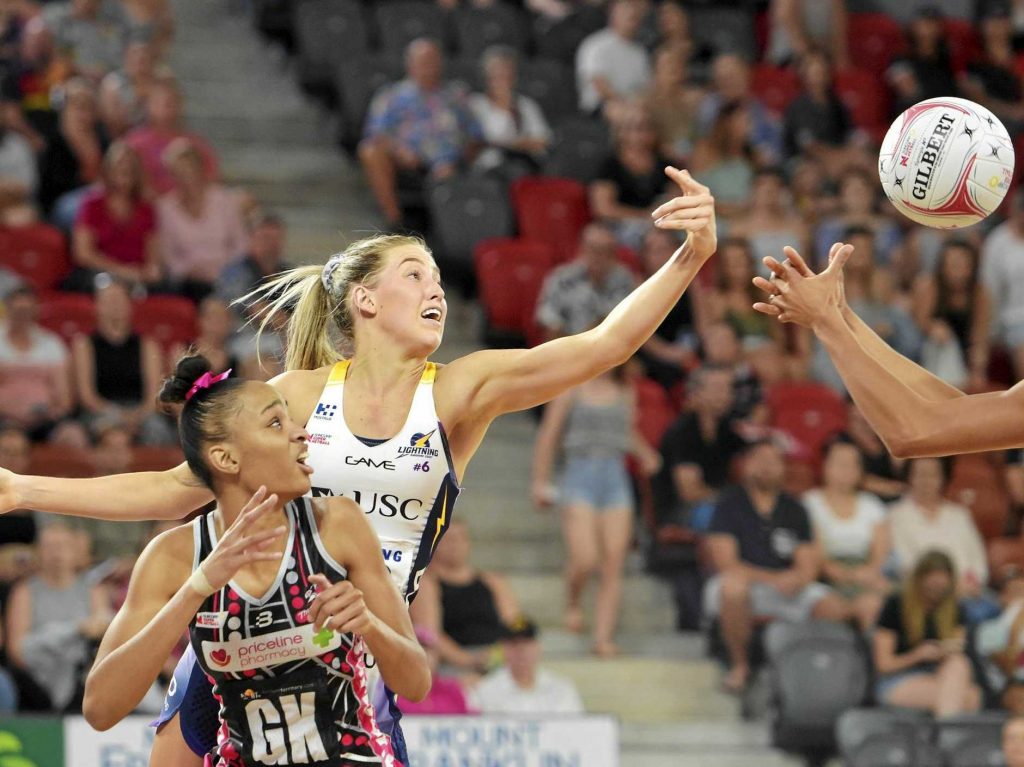 WITH the Suncorp Super Netball set to return in just over a month there is plenty of hype surrounding the season and which team will assert themselves on the competition. Last year the Lightning and Swifts seemed to dominate most areas when it came to statistics, but that did not stop Adelaide Thunderbirds recruit Shamera Sterling from leaving her mark claiming prime position in a couple of crucial stats while West Coast Fever goaler Jhaniele Fowler was also well represented in terms of statistical dominance. Draft Central poses some hypotheticals for the 2020 season, taking into account 2019 form, potential development over the off-season and enforced COVID-19 break.

Defensive rebounds:
Talented goal keeper, Sterling dominated rebounds last year notching up a whopping 35 for the season. Collingwood and England Roses goal keeper Geva Mentor was not far behind with 33, something she will be hoping to build on this season given the young and inexperienced defensive unit behind her heading into 2020. Premiership player Sarah Klau proved to be a force to be reckoned with under the post with her strong positioning and rebounding ability amassing the fourth most with 28 for the season. With Diamonds experience under her belt Klau could be an even bigger threat in the 2020 SSN season. While Emily Mannix did not feature within the top 10 for rebounds last year expect the Melbourne Vixens defender to be around the mark this season, with the defender showcasing a renewed hunger towards the end of last season.

Goal assists:
It is no surprise that Melbourne Vixens and Australian Diamonds vice-captain Liz Watson took out the number one spot when it comes to goal assists with the wing attack simply unstoppable on circle edge with her pinpoint passes. Watson was quick, precise and accurate, feeding into the circle with a whopping 430 goal assists, 139 more than the next closest in teammate Kate Moloney. The Vixens centre was a key contributor throughout the season and will be around the mark once again in season 2020. The highly anticipated return of Madi Browne could see the speedy midcourter leap into the top five when it comes to goal assists as she will have to lead the attacking end for the Magpies given the wealth of personnel changes. Another possibility to join the top five is Swifts captain Maddy Proud who will hopefully make her return from an anterior cruciate ligament (ACL) injury in the early stages of the season. Renowned for her speed, dynamic movement and quick hands she could have a real impact in the Swifts attacking end.

Centre pass receives:
Pocket rocket Laura Scherian took out the number one spot when it came to centre pass receives in season 2019, with the nippy wing attack able to burst out over the transverse line and get the ball moving. Her speed off the mark and fancy footwork was one of a couple reasons why the Lightning were so successful with Scherian amassing 428 passes while Watson was not far behind with 375. Often flying under the radar when it comes to her work at the transverse line Gretel Bueta was a prominent threat with 325 receives. Her load may lift even further in 2020 with the retirement of Caitlyn Nevins so expect her to enforce herself in the midcourt. Depending on what position Paige Hadley plays she could be another player that appears within the top 10 while Browne is another possibility.

Goals:
Jamaican powerhouse and West Coast Fever go-to girl Jhaniele Fowler was simply unstoppable under the ring last year and will be hoping to replicate that form again this season. Standing at 198cm the goal shooter is a commanding presence and wowed many with her ability to perform week in week out racking up 709 goals. Fresh off a premiership expect Sam Wallace to pick up where she left off last season with the Swifts goal shooter able to slot them from everywhere no matter the pressure. With a potential increased load in the 2020 season due to pregnancies in the Collingwood camp, Shimona Nelson will have to push herself even further. Slotting 637 goals for the season, Nelson’s numbers could rapidly rise as she becomes an even bigger target for the Pies given the inexperienced attack. While Romelda Aiken did not make it into the top five last year, likely due to missing games for injury, the Firebirds goaler is renowned for her ability to score quickly and at a high volume so expect big things from her this season, while increased court time from Cara Koenen could also see the Sunshine Coast product sneak into the top five.

Deflections:
Sterling took out the top deflections position with an impressive 120 for the year, a clear testament to her read of the play and ability to impact the contest. She was involved in just about everything and with another pre-season under her belt and more accustomed to the high intensity pace of the game will be raring to go heading into the 2020 season. Klau was another one who impressed last year and will be eager to keep the good times rolling if they are any chance to win back-to-back premierships. Surprisingly, powerhouse defender Karla Pretorius did not feature within the top five when it comes to deflections so expect the tenacious South African to be in the mix while Thunderbirds returnee Layla Guscoth is also renowned for her ability to create tips and turnovers. The development of Tara Hinchliffe and Kim Jenner could see the duo feature within the top five this season while GIANTS wing defence Amy Parmenter is also a threat with her lightning quick pace and slickness on court.

Intercepts:
Although she did not feature in the deflections, Pretorius shone when it came to the intercept category with 69 for the season, one more than Sterling. Pretorius was a game changer for the Lightning, able to spring into action and take a huge intercept with her cleanliness and read of the play. After falling short in the grand final expect that fire in the belly to be evident and for Pretorius to once again be amongst the top echelon of players. Mannix was a prominent threat last year with her history breaking 10 intercepts in one game and ability to read the play. Collingwood newcomer Jodi-Ann Ward has proven on the international stage that she knows how to win ball back with her quick footwork and long reaching arms, while Magpies teammate, Mentor could also be in the top five once again given her strength in the air and skill to float into space and pick off passes. After a quieter 2019 season, West Coast Fever captain Courtney Bruce will be chomping at the bit, looking to assert herself and collect more deflections to rise up the leaderboard.