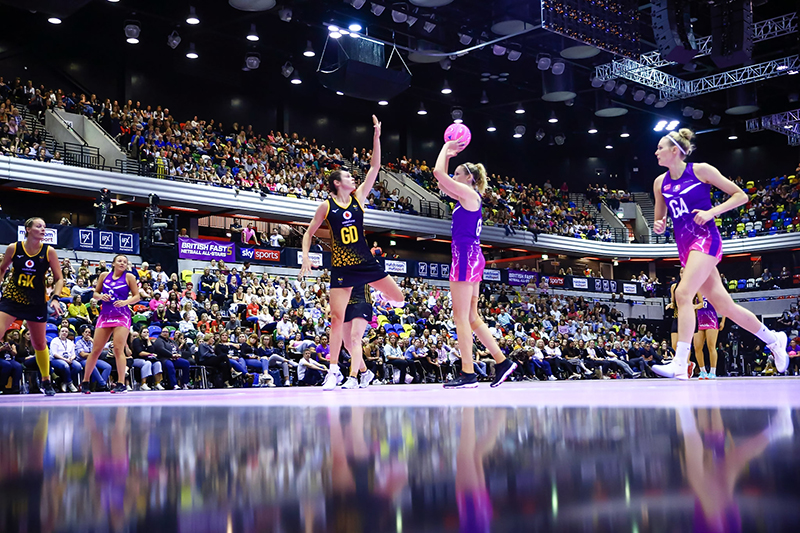 THE introduction of the two-goal Super Shot to the Suncorp Super Netball (SSN) has been the biggest shock to the netball community in recent history. Coaches, players and the biggest names in netball across the world have come forward with their thoughts on the introduction of the controversial rule change. But what would happen if the UK followed in the footsteps of the SSN and introduced a reward for long-range shooting?

No team would benefit more from this rule change than Wasps Netball. Renowned as the “long bomb queen” Rachel Dunn has a habit of slotting them from anywhere in the circle, and even from outside when it comes to Fast 5. She was the MVP at the British Fast 5 All Stars in 2018 and just missed out on that title in 2019 to the formidable Jo Harten. Backed up by Katie Harris and Alexia Baker, Wasps would be unstoppable if they managed to keep the score close during the first ten minutes of each quarter. With the experienced Dunn at the post, and their exciting defensive line of Fran Williams and Hannah Knights creating plenty of turnover ball, they would be back on top as the team to beat.

London Pulse’s Chiara Semple is another master of the long bomb. With good accuracy from range and the typical New Zealand confidence to post, Semple would most likely benefit from the Super Shot rule, as she typically shoots from distance anyway. With Sigi Burger standing at 6′ 5″ under the post for the rebound, Pulse could fire these off all day long. Especially given their exciting form at the start of the 2020 season, this would add another advantage to the already improving side. Another team with confidence in their attack end is Team Bath. You would expect youngster Sophie Drakeford-Lewis to rise to the challenge of a two-goal shot if it were introduced, and her connection with Kim Commane would provide a strong starting point.

Two England Roses who do not shy away from a long ranger are Ellie Cardwell and George Fisher for Manchester Thunder and Saracens Mavericks respectively. These two have such great composure on their shot and have both been going from strength to strength over the past few seasons. Whilst Fisher usually takes the majority of her shots from under the post, she is accurate from anywhere, memorably sinking one from near the transverse line in Fast 5. For Thunder, Cardwell has so much strength on the hold and knows how to create space for herself to find good mid-range shooting position. Given her skill in the circle, it would not be hard for her to transition into an exciting long-range shooter. Both of these teams benefit from strong and experienced shooting partnerships, Fisher with Kadeen Corbin, and Cardwell with Kathryn Turner, giving them the edge over teams with only young blood in the attacking end. Saracens Mavericks also have the advantage of defensive mastermind Razia Quashie, as well as tall tower Jo Trip, to scoop up any stray shots and build pressure at the back.

Both Celtic Dragons and Severn Stars have potential secret weapons when it comes to shooting from further away from the post. Jamaican import Rebekah Robinson has fantastic movement in the circle for Dragons and is a playmaker with the ability to shoot long when needed. England Fast Nets player Lucy Herdman delighted fans with her distance shooting at Fast 5 in 2019, leading Dragons to their first-ever semi-final in the competition. She now plies her trade for Severn Stars and while we did not see much of her on court during the short 2020 season, Herdman would be a valuable asset for Stars to have up their sleeve.

The remaining teams would probably struggle to keep up based on their current shooting strengths. Loughborough Lightning’s Ella Clark does have the experience shooting from range due to her basketball background, however her accuracy can sometimes falter when she is under heavy defensive pressure. Another team that would need to improve their accuracy to post are Strathclyde Sirens. Lynsey Gallagher can be a real threat, and as a shorter goal attack, she does tend to take shots from further out. However Sirens are usually less accurate than other teams on their goal conversion, and in a situation where shots are worth more than one point, this could really hurt their chances. For Surrey Storm, their issues lie in other areas of the court. Karen Bailey typically shoots from under the post, and while Sophie Hankin is a possible threat from further out, Storm would need to stay in touch with other teams to secure wins. After a shaky start to 2020 they will be rebuilding, and hopefully will have secured some of their structures by the time netball resumes.

Netball fans in the UK, like many in Australia, are generally not keen for the introduction of the Super Shot in the VNSL. Sara Bayman has been openly critical of the decision on the Netball Nation podcast, stating that the rule change moves even further away from the international game. She accused the new rule of “sabotaging your own national team” and believes it is likely to bring more bad news for the Diamonds. However, Tamsin Greenway has claimed this is a chance for netball to evolve and suggests we will see a move away from the tall holding shooter slotting them in from under the ring. Clubs in the UK may be glad this is being trialled down under and not in the VNSL during such a time of uncertainty for netball in the UK. Due to the backlash from netball fans in the UK, it seems unlikely that such a bold move would be considered, especially when the influence of broadcasters in England is much lower than in Australia.