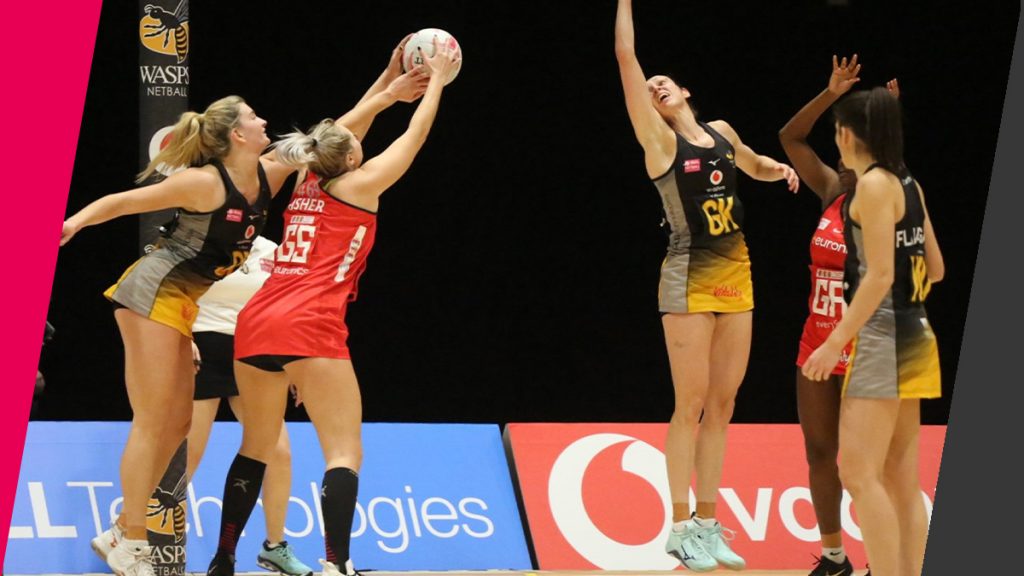 WITH ongoing uncertainty around the timing of future international fixtures for the Roses, Draft Central considers what would happen if England matches overlapped with the upcoming 2021 Vitality Netball Superleague (VNSL) season. Which teams would find they had key players missing from their starting lineups, and which youngsters could take the opportunity to show what they are made of? The below is purely opinion-based, with a potential England squad based on recent selections. Unsurprisingly, the top five teams from last year would be the most heavily impacted if their Roses were called away on International duty.

Loughborough Lightning struggled when gutsy midcourter, captain and Vitality Rose Nat Panagarry was injured during the first game of the 2020 season. She provides a ton of experience to an otherwise fairly junior Lightning lineup. This lack of leadership on court, unfortunately, showed in their 14 goal loss to Team Bath at the season opener, and a narrow loss to Manchester Thunder two rounds later. The likes of Jess Shaw and Hannah Williams were required to step up to replace their captain and provide a link through court. Whilst they demonstrated plenty of zip and confidence in attack, Loughborough still missed the dogged defence of Panagarry during these games and would likely suffer as a result if she were to be absent again in the future.

Next, we take a look at reigning champions Manchester Thunder. Ellie Cardwell and Laura Malcolm both proved they deserve court time in the red dress during the 2020 Netball Nations Cup and would be high on the list for England selection. Luckily for Thunder, they have a fantastic goal shooter in Malawi international Joyce Mvula, who maintained 87 per cent accuracy in the opening rounds of the 2020 season. Thunder would certainly miss Cardwell’s clever footwork and ability to shoot from range, however Mvula provides a strong and reliable option. Manchester also has a tenacious midcourter in Amy Carter, who is capable of switching between centre and wing defence with ease. She provides a huge amount of energy and defensive pressure through court and could easily slide into the gap left by Malcolm. In the next few years, we will surely see this exciting youngster earn a starting spot in the Roses, and fingers crossed in Season 2021 she will benefit from further court time.

One team that would be heavily impacted by a scheduling clash is the talent stacked Saracens Mavericks. They are peppered with Roses talent across all three areas of the court, from George Fisher to Gabby Marshall, not to mention Jodie Gibson and Razia Quashie. Losing a holding shooter of the calibre of Fisher, even for one match, would heap pressure on someone like Kadeen Corbin to provide a clear option in the goal circle. In the midcourt, Marshall is an engine and provides support to Sasha Corbin and Georgia Lees, often coming on as an impact player. Although we haven’t seen Gibson on court for Mavericks yet due to injury, she will no doubt become a starting defender next season. Losing gold medal winner Gibson to England duties, combined with the absence of Quashie, would be a huge loss for Mavs. Quashie collected the highest tally of intercepts in the first three rounds and without her Jo Trip would have to bear a heavier defensive load than she is used to.

In contrast, Team Bath has a wealth of depth and experience across the squad. Despite starting the 2020 season without Serena Guthrie or Eboni Usuro-Brown the youngsters in this side have already proved they can step up when their big names are away. Co-captains Summer Artman and Kim Commane are rock solid, supported by versatile Fi Toner and exciting South African international Khanyisa Chawane. Not to mention Imogen Allison who really rose to the challenge in the first three games of 2020 and proved she has a bright future ahead. Artman and Allison have cemented themselves as future Roses, and after a fantastic start to 2020 they will be looking forward to plenty of court time next season.

Wasps Netball is another team that benefits from an experienced lineup. Although in this scenario they would most likely be without Fran Williams (who ranks in the top five for intercepts and deflections), the likes of Hannah Knights and Josie Huckle both have an excellent read of the game and the athleticism to back it up. The main issue would be if Wasps were without England veterans Jade Clarke and Rachel Dunn. Dunn has won more domestic titles than Geva Mentor and Clarke has over 170 caps for England. Wasps would struggle without these two game changers and whilst Katie Harris and Amy Flanagan have plenty of Superleague experience between them, it is likely the team would still miss the impact of the seasoned duo of Clarke and Dunn.

Celtic Dragons, London Pulse, Severn Stars, Strathclyde Sirens and Surrey Storm don’t currently have players in their squad who would be likely to be called up for England selection. However, the World Youth Cup is scheduled for June 2021. If all squads stay the same, Pulse would be missing several key bench players including Kira Rothwell, Funmi Fadoju and Olivia Tchine. This will certainly be something for Superleague coaches to consider when choosing how to balance their squads for next season.