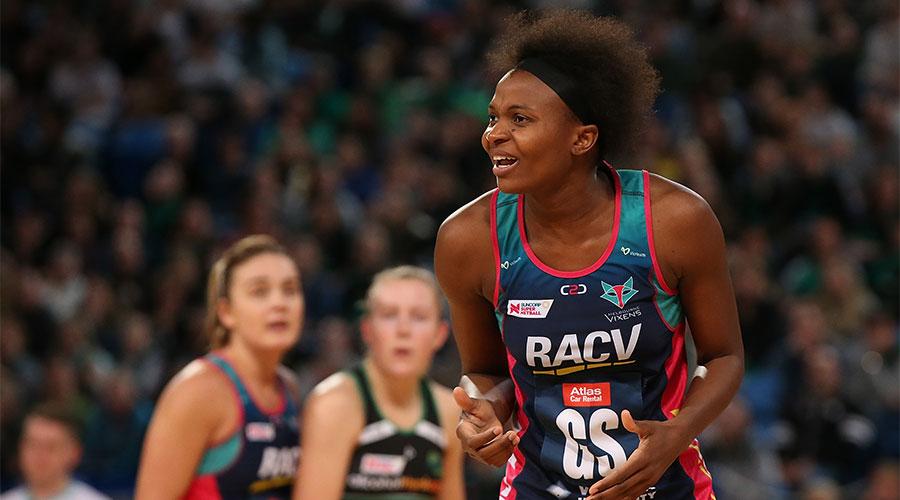 IN the second last game of the 2018 Suncorp Super Netball (SSN) season, Melbourne Vixens goaler Mwai Kumwenda injured her anterior cruciate ligament (ACL), ruling her out not only for the rest of the season but so too much of the 2019 season. With athleticism and accuracy to boot, Kumwenda was a key cog in the goal circle for the Vixens and was sorely missed throughout the 2019 season despite the acquisition of another shooting sensation.

Kumwenda is highly reliable, able to post a high volume of shots and impose herself in the goal circle up against some of the worlds most renowned defenders such as Geva Mentor and Courtney Bruce. Her unique style of play allowed her to continuously have an influence under the post. While she is not the strongest or bulkiest shooter it is her clever positioning, fancy footwork and go-go gadget arms that make her such a challenge for opposition teams.

Sidelined for the majority of last season, new recruit and fan favourite Caitlin Thwaites took the centre stage alongside goal attack Tegan Philip. The two combined seamlessly with their impressive movement, shooter to shooter interplay and accuracy to post doing all the talking. However, with finals quickly approaching and Kumwenda on the mend, the inclusion of the Malawi shooter added an extra element to the Vixens’ somewhat predictable line-up, helping them surge ahead and take out third position on the ladder.

But what if Mwai Kumwenda did not return to SSN? Would the Vixens have gone as far as they did in 2019?

Her on-court influence is hard to deny. Simply the way Kumwenda moves and her effortless shooting action makes her incredibly hard to stop while her versatility to change from a holding to moving shooter adds another string to her bow. With pressure mounting towards the backend of the 2019 season the option to bring Kumwenda on for the Vixens paid dividends with the goal shooter able to absorb the pressure and shoot truly. Unfazed by the score or the theatrics of the game, Kumwenda was cool, calm and composed and forced other teams to shake up their defence given her impressive timing, aerial ability and strong hands on the take.

Since taking the court in 2017, Kumwenda has proved that accuracy and volume is no issue posting 588 goals in 2017 and 501 goals in 2018. While her 2019 season was interrupted, her accuracy did not waver, only missing nine of her 66 attempts. Her strong connection with the likes of Liz Watson and Kate Moloney was another focal point for the Vixens’ late success, with the midcourters easily able to sight the Malawian shooter and deliver the ball on a silver platter to her. The innate understanding between the trio allowed the Vixens to thread the needle through the defence and apply both attacking and scoreboard pressure, giving them the edge in the semi-final against Collingwood.

While she is not the sole reason the Vixens were able to triumph their way into the preliminary finals she was a key aspect to their success, able to come on and have an influence when need be. Although the Vixens also had South African Ine-Mari Venter amongst the mix the still developing shooter at times lacked the explosiveness and experience of Kumwenda.