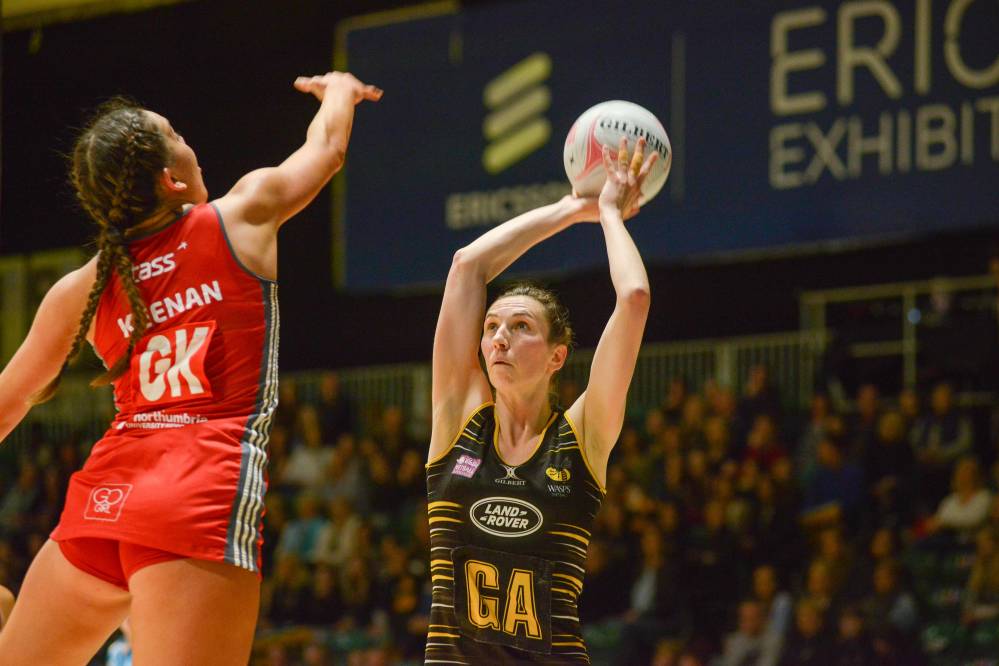 ALTHOUGH the Vitality Netball Superleague (VNSL) season is on hold Draft Central casts an eye over the leading player in each statistical area after four rounds and the influence they could have on the competition if they continue on that trajectory when the season resumes.

GOALS:
It is no surprise that England Roses and Wasps Netball goal shooter, Rachel Dunn is head of the leader board with the quick footed and accurate goaler amassing 158 goals from her four outings. Dunn is a commanding figure under the post and while she does not tower over defenders it is her precise movement that gives her that competitive edge and if she continues that form it will go a long way for the Wasps. In at second on the leader board is Severn Stars shooter, Georgia Rowe with 151 goals to her name across four matches. In their three appearances Mary Cholhok notched up 146 goals, while co-captain and Team Bath goal shooter Kim Commane managed 137, mounting a good foundation for Bath to build off upon their return. Rounding out the top five is Saracen Mavericks youngster and shooting sensation George Fisher who asserted herself on the competition with 131 goals in just three games. Fisher could be a key reason for her side’s success in 2020 with her strong holds and clever positioning.

Accuracy:
Putting up shots is no easy feat but being able to convert them is even harder. But that did not seem to be an issue for Spar Proteas goaler and new London Pulse recruit Sigi Burger who tops the table at 97.64 per cent given she converted 124 goals out of 127 attempts across her three games. Cholhok comes in at second with the Ugandan shooter proving to be no slouch under the post with a conversion rate of 94.81 per cent, while Rowe managed 94.38. Dunn also featured in the top five with her accuracy under the post working wonders sitting at 92.94 while Fisher managed 131 goals from 142 attempts at an impressive 92.25 per cent.

Intercepts:
There is no shortage of stars when it comes to defence with none bigger than up and coming Roses defender and Saracens Mavericks goal keeper Razia Quashie. The light-footed defender is able to gobble up any intercept that comes her way credit to ability to read the play. Quashie currently sits pretty on top of the leader board with 15 intercepts across the first three games of the season and if she keeps it up will give the Mavericks a fighting shot at the premiership. Jamaican youngster and Celtic Dragons defender Latanya Wilson also starred in her two appearances impressively racking up 14 intercepts while Towera Vinkhumbo proved to be a wall in defence for the Severn Stars with 13 intercepts to her name. The experienced Emma Dovey takes out fourth spot with 12 while England Roses dynamo Fran Williams showcased her defensive prowess with 11 intercepts across three games. If Williams can up the ante it could be the spark the Wasps need to get back on the board in 2020.

Deflections:
It is not easy to get deflections but Leah Middleton has made it a part of her repertoire with the former Queensland Firebirds training partner in the Suncorp Super Netball displaying an innate ability to do just that. She has been a key cog for the Surrey Storm amassing 15 deflections across the start of the season. Manchester Thunder’s Loreen Ngwira also starred prior to the postponement of the season with 15 deflections to equal Middleton. Ngwira played a handy role last year and seems to be following on from that, giving her side a chance to gain another premiership. Testament to her defensive skill, Dovey also managed to get herself in the top five for deflections with nine while South Africa, Zanele Vimbela also proved to be a handy inclusion for the Strathclyde Sirens with the lanky defender able to get a hand in everything and create nine deflections. The final spot in the top five goes to Fran Williams with the Wasps defender using her quick feet to track the ball and force a tip.