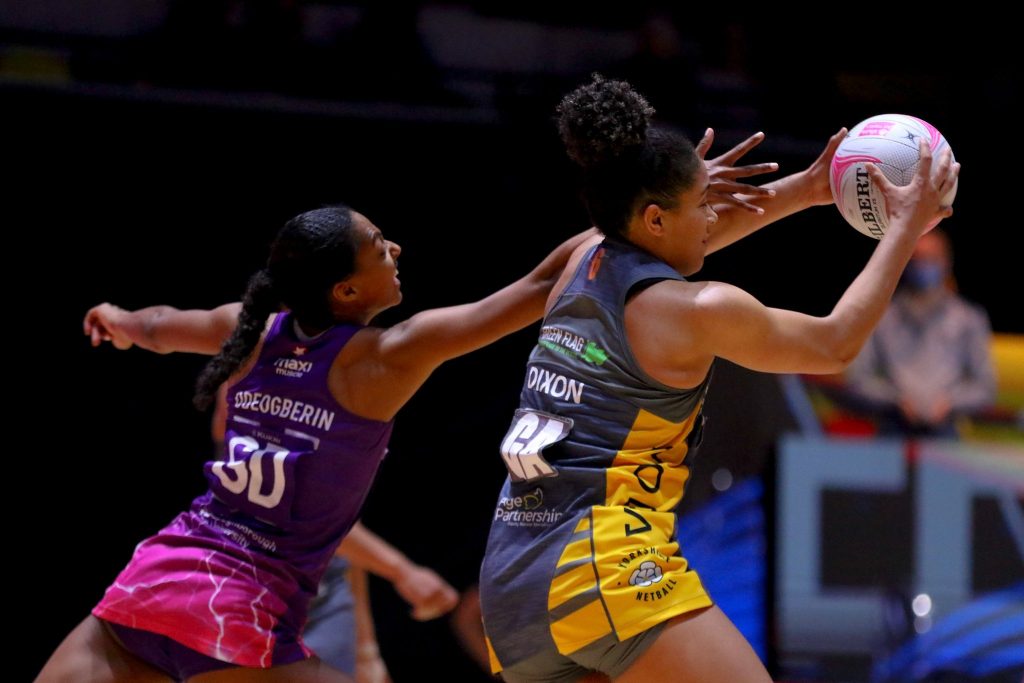 THE Vitality Netball Superleague finals have arrived, with two huge matches setting up Sunday’s finals. First up is a battle between one and four, with the Loughborough Lightning and Leeds Rhinos going head-to-head, with the two versus three clash between Manchester Thunder and Team Bath following that.

A huge battle is set between the Lightning and Rhinos, with one side in winning form and the other having spent a couple of weeks away from the courts with COVID-19 mandated restrictions. That being said, the Rhinos have been a big threat this season with a potent attacking end, hunt for the ball and willingness to contest hard, meaning they are a bit of a smoky here against the consistent Lightning. Both sides have plenty of upside and little flaws, making this matchup one to watch for sure. Lightning earned the minor premiership at the end of Round 20 and got the chocolates in both prior matchups this season, meaning they have the slight upper hand in this contest, but it is safe to say they should not underestimate the Rhinos, with the side stepping up well at every hurdle in the latter stages of the season.

A lot of this clash will come down to which side can take an early lead, with both sides boasting some huge gamechangers. Whilst there is no doubt the Rhinos have been a powerful team in the latter stage of the season, there’s a huge question mark over whether they have the tenacity, hunt and four quarter endurance to beat Loughborough Lightning without Donnell Wallam out on court in goal shooter. Rhea Dixon and Brittany Coleman boast plenty of exciting attributes in the goal circle, while Brie Grierson is another viable option who can rotate into the circle, however much of the side’s forward drive has come down to spotting Wallam at the post and propelling the high ball in. Coming up against the likes of Jas Odeogberin and Sam May, the Rhinos attack will certainly have plenty to think about especially with May’s impending retirement following the end of the season. Also bolstering that Lightning backline is Beth Cobden who has proved to be a livewire in wing defence throughout the season, while Nat Panagarry is a consistent performer out in centre, set to take on veteran Jade Clarke who will certainly match her for smarts and hunt on the ball. At the other end Mary Cholhok and Ella Clark have been hard to stop this season with Suzie Liverseidge providing an additional option to the post and consistently wreaking havoc out the front, meaning the likes of Paige Kindred and Tuaine Keenan will have their work cut out for them alongside tenacious micourter Fi Toner.

Two teams coming off very different finishes to the season, there is no doubt this semi-final clash between Bath and Thunder will be a blockbuster. Both sides boast a wealth of talent across the court and plenty of versatility, however Bath have become a fraction predictable in the latter stages of the season while Manchester have continuously fired, creating a hugely even clash here. Whilst Manchester has the momentum coming into this final following a couple of confidence boosting wins to finish the season, Bath is on the back foot for the first time all season and it really showed in their last few matches. That being said, Bath got the better of Thunder both times they met earlier on in the season, and will not go down without a fight here after dropping the minor premiership this week.

Thunder’s defence in Kerry Almond and Emma Dovey has been on fire in recent weeks while Rebekah Airey has also been a formidable force in both wing defence and goal defence. Comparatively, Bath boasts its own hugely exciting defensive outfit with Layla Guscoth and Ebony Usoro-Brown not skipping a beat in each encounter this season. Expect an intriguing clash of speed, defensive nous and agility as Imogen Allison and Caroline O’Hanlon potentially go head to head, while Laura Malcolm and Amy Carter are also formidable forces who will look to split the midcourt and hunt for the turnover ball.The ever impressive Serena Guthrie can be hard to stop however, with her aerial ability and willingness to contest every ball continuously empowering her side, with her and Allison’s combined pressure allowing both Guscoth and Usoro-Brown to go out hunting. In the goal circles, it will be a battle of accuracy, volume and level-headedness, with both sides boasting huge talents to post. Thunder’s Joyce Mvula and Ellie Cardwell are two of the most consistent performers in the league, with an ability to share the load when required or take on the pressure themselves. Meanwhile, Kim Borger and Sophie Drakeford-Lewis are similarly as exciting to watch, with Drakeford-Lewis’ playmaking ability and skill from range providing a constant buffer for the defence.