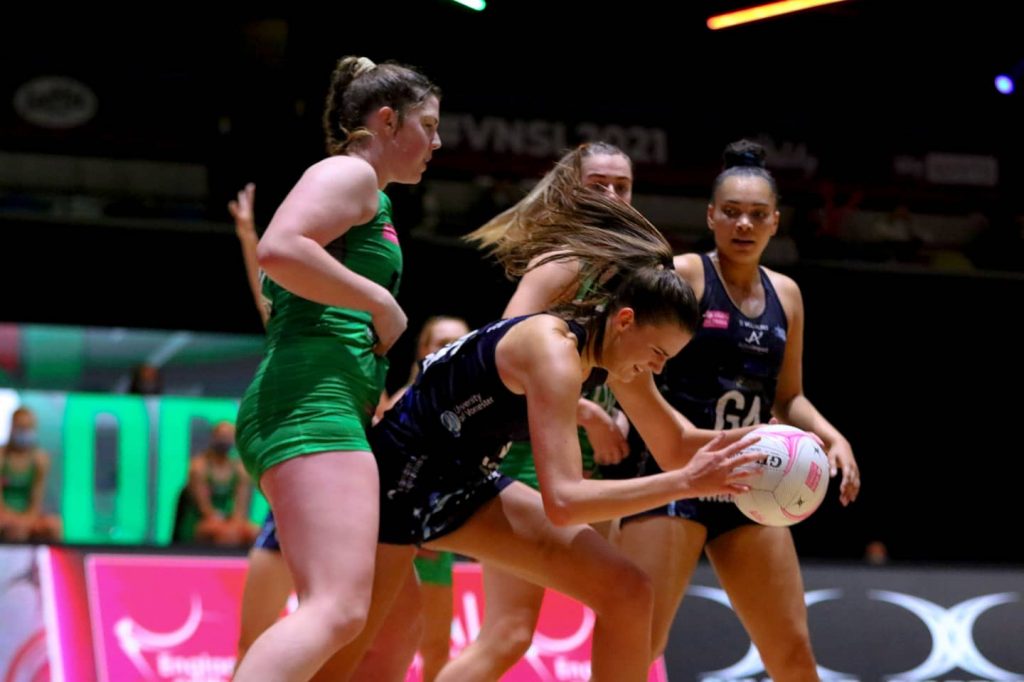 SUNDAY’S Vitality Netball Superleague matches are done and dusted for Round 20, with four teams completing their respective seasons. Whilst two sides started strong before their opposition flipped the script, Manchester Thunder had no holds barred in a massive clash with Strathclyde Sirens, taking out top spot ahead of the battle between Team Bath and Loughborough Lightning on Monday night.

A shaky start from The Mavericks was not enough for the Surrey Storm to execute an upset, with the classy Mavericks showcasing plenty of hunt in the second half to well and truly overwhelm the Storm. The Mavericks proved that their seven-goal first quarter would not be the end of them, completely resetting at half-time and only allowing a total of 13 goals from the Storm throughout the second half – just four in the last – in a complete shutout by the Mavericks defenders. Whilst it was not the ideal finish to The Mavericks’ season, the hunt they displayed in the latter stages of the game when the game was in the balance allowed the side to finish on a high during Jo Trip’s final match before retirement.

Karyn Bailey impressed to post in her second last match before retirement, finishing with 30 goals despite the hefty defensive effort that was imposed upon her. However it was the lack of assistance to post that really hurt the Stars as Emma Magee and Sophie Kelly only combined for five goals from nine attempts credit to the workrate of Jodie Gibson and New Zealand retiree Trip down back, as the duo combined for five intercepts and 11 deflections, resulting in seven turnovers. Beth Ecuyer-Dale was immense combining with Gabby Marshall through the midcourt, with the two seamlessly transitioning the ball up the court with speed and clean hands to boot, whilst Sasha Corbin showcased her continued connection with sister Kadeen (11 goals) and South African Ine-Mari Venter, who continues to shine in attack finishing with 35 goals from 37 attempts. Felisitus Kwangwa and Grace Sullivan put on a solid defensive showing for the Storm, combining for six intercepts, 10 deflections and nine turnovers. A combined six turnovers from the midcourt combination of Yasmin Parsons, Mikki Austin and Niamh Cooper did not do the side many favours, although Austin did win back a valuable intercept.

Manchester Thunder topped off an excellent season with a huge win to complete their home-and-away fixtures, firing on all cylinders from the get-go and piling on the defensive pressure against the Sirens to pull off a 27-goal victory. Whilst the Sirens had a better second half, it was their shaky first half that really allowed the Thunder to stand up, with the Sirens attack failing to provide the same potency they have in recent weeks. Thunder piled on 31 goals to 15 in the first half to sit head and shoulders ahead of the Sirens going into the second half, and added insult to injury in the final term with 18 goals in the fourth alone to extend the huge victory.

There is no denying that Thunder boasts some of the best and most accurate firepower in the competition, and that was once again evident in this clash as Joyce Mvula piled on a whopping 40 goals as Ellie Cardwell applied ample assistance finishing with 24 and the duo missed just five attempts throughout against daring opposition. But the usually potent Towera Vinkhumbo just was not able to get hands to turnover ball, credit to the excellent feeds from Caroline O’Hanlon and Amy Carter, with the duo threading the needle time and time again to force errors from the Sirens defence and Carter teaming well with Laura Malcolm at the other end, wreaking havoc off circle edge to finish with four intercepts. It was a defensive masterclass from the Thunder, with player of the match Emma Dovey and Kerry Almond dictating both the pass and the placement, getting their hands to constant ball and the duo combined for 13 turnovers off the back of Dovey’s five intercepts and Almond’s two. Sirens’ attack had no answer for the Thunder’s hunt, as Bethan Goodwin, Niamh McCall (both 13 from 16) and Emma Barrie (11 from 16) struggled to receive easy passes, with Beth Dix well held and Gia Abernethy forced to run with Carter.

In another tight start the Celtic Dragons and Severn Stars could not be split throughout the entire first half of their match up to finish off Sunday’s proceedings with a tight clash. But the Stars put on the accelerator in the third, executing an 11-6 quarter to extend the first major lead of the game. Whilst the Dragons tightened up in the final term, it was not enough to turn the tides as the Stars ran out six-goal victors under pressure, well and truly earning their fourth win of the season. To the Dragons’ credit they put out a fine performance, but unfortunately could not hold on for the full four quarters as the Stars’ experience reigned supreme.

the seesawing start was down to the defensive effort from both sides, with Abigail Tyrrell and Annika Lee-Jones controlling the airways down one end, and Iman Thomas and Lucy Herdman working hard at the other to pressurise the contest. All four defenders worked hard, however it was the likes of Paige Reed that became the showstopper throughout the contest, taking control of the Stars front-end to command possession and using her quick footwork to out-manoeuvre Tyrrell’s heavy attention down the court and evade Lee-Jones’ long arm inside the circle. Dixon shared the load with Georgia Rowe, piling on 23 goals to Rowe’s 22, and opened up space well for Lucy Harris (two turnovers) and Kyra Jones to find purchase on circle edge as the Stars extended a lead. Defensively, the Stars were marginally cleaner finishing with 27 penalties across Herdman, Thomas, Adi Bolakoro and wing defence Nia Jones, compared to Dragons’ 37, between Tyrrell, Lee-Jones and Clare Jones in wing defence. Amy Clinton (30 goals from 34 attempts) and Rebekah Robinson (nine from 13) worked hard in the front end for the Dragons, while Shona O’Dwyer was a nuisance in centre picking off three deflections.