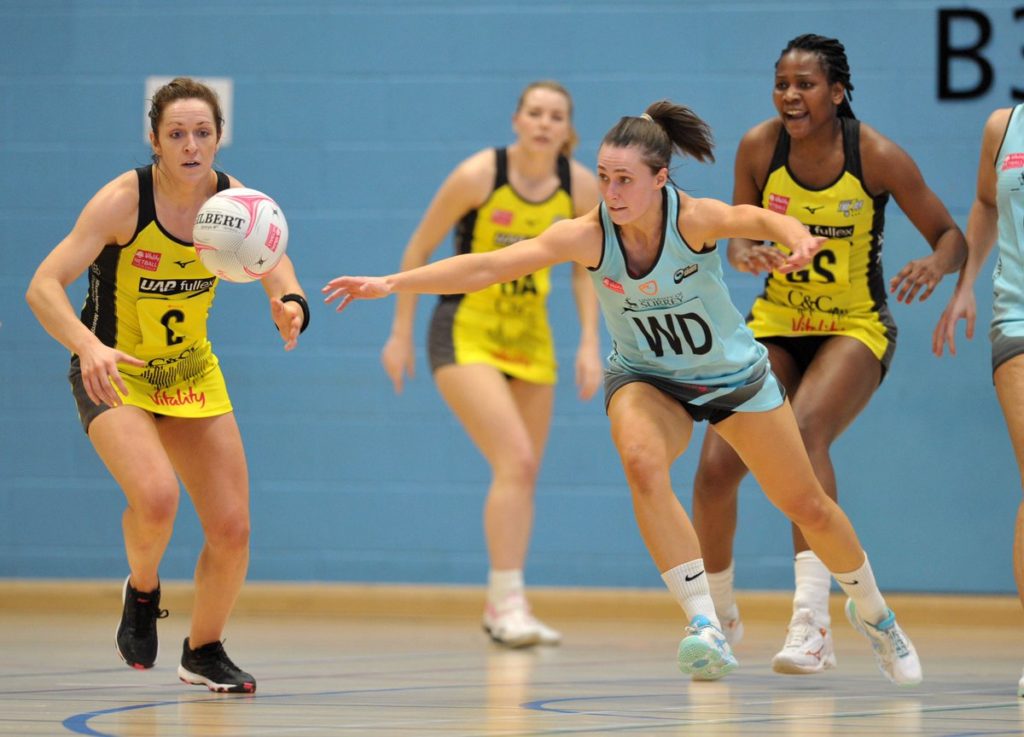 ONLY two games were played in Round 4 of the Vitality Netball Superleague (VNSL) as a result of the coronavirus. While not all the games went ahead, the two games that happened provided plenty of intrigue and a surprising upset.

The first game of the round well and truly lived up to the hype with the Stars pulling off one of the biggest coups this season with a five-goal win over the Wasps. The Stars established a handy lead in the first quarter and steadily built on it heading into the main break with a three-goal buffer. But the Wasps are a classy unit and showed just how easily they can flip the script going on a scoring rampage of 18 goals to 10. The strong fight back did not last long though, with the Stars landing the final blow in the last quarter with an impressive 10-goal turnaround. Severn simply could not be denied under the post piling on a whopping 20 goals while keeping the Wasps under wraps and limiting their attacking ball movement. They simply could not maintain their high intensity third term falling short and notching up their third loss for the year a feat they would not have been expecting heading into the season. The Wasps were force out of their usual game style racking up 20 unforced errors and while defensively they were strong winning the deflections and intercepts tally the Stars took the cake when it came to accuracy and ability to stay away from the whistle.

Georgia Rowe was a key cog in the Stars win with the towering goal shooter only missing one goal for the game and nailing a game-high 47 shots. Rowe was unstoppable under the post making it look effortless with her clever movement and connection with shooting comrade Paige Reed. The goal attack managed to put on 12 goals and while her accuracy was down, missing six goals she played a pivotal support role. Defensively Towera Vinkhumbo was in a league of her own with the new recruit racking up the stats with four intercepts and four deflections. Wasps’ shooter Rachel Dunn was her usual dominant self in the goal circle with her impressive timing, strong hands and range on full display with 45 goals while both Sienna Rushton and Alexia Baker struggled to find their rhythm with a combined nine goals. With the attacking end struggling to fire, Fran Williams led the way down back with her ball winning ability and desperation. Williams finished with two rebounds, four intercepts and one deflection while goal keeper Hannah Knights imposed herself with two intercepts and one deflection. Jade Clarke found herself back in wing defence up against former Silver Fern Liana Leota who was clever with ball in hand and played a big role in creating scoring chances for her side.

Manchester kept their undefeated run intact with a dominant 18-goal win over the lowly Storm. The Thunder raced out of the gates opening up a six goal lead at the first break and extending it to 13 by half time. It was a complete performance by the reigning premiers who looked slick across the court and never really gave the Storm a chance. Although their scoring dried up in the second half, only adding 27 goals to their tally compared to their 33 in the first half, the Thunder still romped it home, keeping the home side under double digits in the fourth quarter. When it came to penalties around the court the away side won the battle with 49-42 while they also had the upper hand when it came to intercepts with Thunder highlighting their defensive prowess with 16 to seven. Despite the Thunder being costly around the court with nine more turnovers 22-13 they managed to win enough of the ball back to do damage on the scoreboard and run out with the win.

It was a trying game for the Storm shooters, with Karyn Bailey and Sophie Hankin receiving plenty of close attention from their opposition. Bailey was the main scoring source for Surrey, with the experienced goaler proving to be a rock under the post with six offensive rebounds to go with her 24 goals. Hankin although she was not overly accurate still had an influence with her 11 goals while through the midcourt Yasmin Parsons and Mikki Austin worked tirelessly to deliver the ball into the circle. However it was the defensive efforts of Caroline O’Hanlon and Amy Carter that stood head and shoulders above the rest through the midcourt with the two taking a combined six intercepts and five deflections. Australian defender, Leah Middleton also had a profound influence and while she received plenty of attention from the umpire with 18 penalties her ball winning ability was on display with a couple of timely tips to disrupt Thunders attacking flow. For Thunder, the shooting load was evenly spread across both Joyce Mvula and Eleanor Cardwell. Mvula was strong under the post with her aerial presence and accuracy on display finishing with 25 goals while Cardwell top-scored with 29 goals from 36 attempts at 81 per cent. In the defensive circle the tried and tested duo of Loreen Ngwira and Emma Dovey wreaked havoc confusing the space with their constant movement and hunt for the ball. Ngwira notched up four intercepts and six deflections while Dovey managed two rebounds, four intercepts and four deflections to cap off an all-round impressive performance by the visiting side.