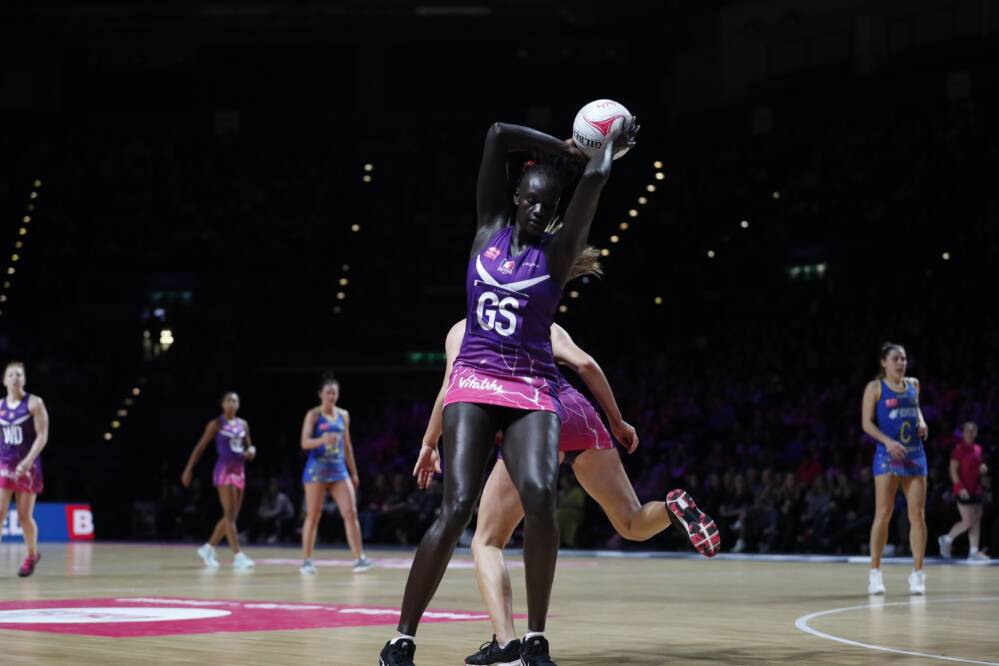 WITH the Vitality Netball Superleague postponed until April 30, only two Round 4 matches went ahead over the weekend and the final three matches suspended until further notice. Manchester Thunder took top spot by default with a win this round, with no other leading sides taking the court. We take a look at some of the key players across the league this season so far.

Veteran Rachel Dunn hit the top of the leaderboard this week with a solid performance against Severn Stars (45 from 47 attempts), overtaking Georgia Rowe for most goals, but with key shooters Mary Cholhok (146 goals from three games), Kim Commane (137 from three) and George Fisher (131 from three) all hot on her tail and down one game at this stage in the season. Sigi Burger remains the most accurate (shooting at 98 per cent) despite not yet playing this round, while Rowe was clinical at the post on Saturday, missing only one shot (47 goals from 48 attempts) and leading her side to victory. While undefeated Manchester Thunder does not have any goalers on the leaderboards for accuracy or volume, the side has a wealth of skill thanks to a rotating circle of Ellie Cardwell (125 goals from 146 attempts at 86 per cent), Joyce Mvula (101 from 116 at 87 per cent) and Kathryn Turner (28 from 38 at 74 per cent) and trust in their players to get the job done, not relying on just the one player to carry the load. Sophie Drakeford-Lewis and Lynsey Gallagher are up there in the tally in at goal attack, shooting 56 and 55 goals respectively to start the season on a high.

Out in defence, Razia Quashie and Latanya Wilson lead the way in intercepts with 15 and 14 respectively. Neither player took the court this week due to match cancelation but somehow still sit ahead of the likes of Towera Vinkhumbo (13 intercepts), Emma Dovey (12) and Fran Williams (11) who have all played four games apiece. Wilson has only taken the court on two occasions this season thanks to a match suspension, making it all the more impressive that she is up there in the intercept count, with the talented Jamaican laying out her physicality and tenacity on the court. Vinkhumbo remains the most highly penalised in the competition with 58 penalties to her name, though Loreen Ngwira and Williams are close behind with 56 and Williams leading the turnover count at 22. Both Severn Stars and Wasps Netball sit on only one win from four matches, meaning messiness in defence could be a real catalyst for the sides dropping much needed matches so early in the season – but also shows a real opportunity for improvement if they can work on the penalty count while matches are postponed. Leah Middleton and Ngwira should be happy with their respective output in defence with 15 deflections apiece after four rounds, contesting the ball well and Middleton especially not finding a heap of the whistle.

Through the midcourt, the likes of Laura Malcolm, Imogen Allison and Adean Thomas remain crucial and influential for their respective sides, holding up well defensively to turn over the ball and feeding with ease in attack. Jamaican speedster, Thomas has proved a handy cog through the midcourt for Pulse, which had nowhere to go but up after a disappointing inaugural season in 2019 – something the side has certainly done despite not playing yet this round. As for the likes of Malcolm (Manchester Thunder) and Allison (Team Bath), it’s their innate ability to rotate through any position in the centre court that makes them such tough contenders, especially in undefeated teams. While both sides boast great defensive capabilities, they can both go forward when required to put their feeding ability to the test and show off their defensive pressure in attack. Veteran midcourters Jade Clarke, Nat Panagarry and Sasha Corbin may not be able to boast being undefeated thus far, but have kept the wheels turning across the court for their respective sides and are known for their consistency and ability to create something out of nothing to spur their side to victory.