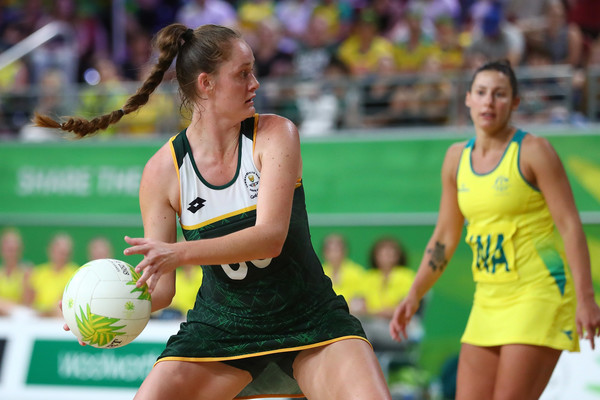 SOUTH African star shooter Ine-Mari Venter is just one of three SPAR Proteas making an appearance in the Suncorp Super Netball league this year. She is set to join the Melbourne Vixens in season 2019 after playing for the Gauteng Jaguars in the South African Brutal Fruit Netball Cup. The goaler brings plenty of excitement and versatility to the line-up, making her a key asset in the Vixens assault on the premiership this season.

“Oh it’s great, you really learn a lot with every session even if you think ‘okay it’s going to be the same again’, nope she always has the upper hand, she always wants more, she always pushes you for a bit more, to be a little bit better than you were before,” Venter said. “So it’s just great and now being here in Melbourne in her home town it’s also a good thing.”

The young shooter is not afraid of the big stage having played in the 2018 Commonwealth Games on the Gold Coast along with the Quad Series in England where the Proteas knocked over the Roses and almost snared victory against the Silver Ferns.

“To be able to make my debut in the Commonwealth Games is also like a big highlight for me,” Venter said. “We didn’t do as we wanted to do but we actually improved on our previous Commonwealth Games result, so yeah it was good and an experience that I will actually never forget.”

Venter has nothing but admiration for her international teammates with Karla Pretorius making a name for herself in the Suncorp Super Netball (SSN) league, while Phumza Maweni will join the Lightning this year in her inaugural season.

“It’s amazing just like her [Karla Pretorius] view on the game and the way she grew across the Suncorp was just amazing,” Venter said. “Just to see and actually train with someone like that it’s really inspirational and it actually pushes you to perform better because you don’t want to let her drop her standard, but actually meet her standard.”

With the Netball World Cup in July, Venter will be hoping to pull a leaf out of her idol, Irene Van Dyk’s book. The South African turned New Zealand shooting sensation is renowned for her impressive performance, accuracy under the post, and ability to break open games with her clever movement and impeccable timing.

“To be a part of a team that goes to the World Cup will be incredible and just to try and improve our ranking or to actually get to a semi-final,” Venter said. “It’s going to be hard but everyone is excited and prepared and really want to push for a top four position. “So it will be really good.”

While the goaler has starred on the international scene, she is looking to become a dominant force in the SSN – joining forces with the Melbourne Vixens and is set to take on her South African counterparts throughout the competition.

Standing at 192cm, the typical goal shooter is learning to add another string to her bow dabbling with the goal attack position. Paired with the experience of Aussie Diamond Caitlin Thwaites and Tegan Philip the shooter had nothing but praise for their hard work.

“Yeah it’s been absolutely great because I’m also training to be a goal attack now as well so I’m trying to cover two positions,” she said. “So to have Caity in at shooter and Tegan at goal attack I’ve learnt a lot, they always help and they always just help me tweak a little bit, just trying the different angle. “They’ve always been helping me and trying to keep me on my toes and just trying to help me improve a little bit.”

The Suncorp Super Netball season commences on April 27 with the Vixens set to take on the Queensland Firebirds at Melbourne Arena.