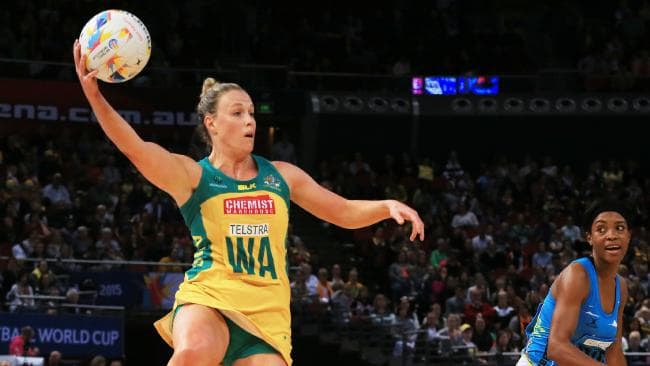 THROUGHOUT Diamonds history there has been a host of star players rotate through the midcourt, particularly the centre and wing attack positions. Since entering a new decade we decided to rank the top five midcourters from 1990 to now. This is an opinion-based article based on the perceptions of the individual writer and how they rank against other centre court players.

#1 Kim Green
Green was a main-stay in the Australian Diamonds midcourt, from making her debut in 2008 to her international retirement in 2015. With extraordinary timing and skill to boot combined with an uncanny ability to create something out of nothing, Green made the wing attack position her own. She could turn on a dime and deliver pin point passes time and time again. Green was a fierce competitor, unfazed by the physical nature of the game and instead thriving on it. Although the latter half of her career was marred by injury she consistently displayed her cleanliness with ball in hand and game making ability. She was renowned for her impressive timing, able to drive hard to the top of the circle and use her dynamic change of pace to create space in the attacking third. Green had arguably one of the safest sets of hands in Diamonds history, able to reel in errant passes while her balance was second to none. She was a real playmaker and provided a steady head, lowering her eyes and delivering bullet passes. The talented wing attack capped off her career with two World Cup championships and a gold medal at the Commonwealth Games.

#2 Nat von Bertouch
The talented centre was not afraid to take the game on, using her ball speed and quick footwork to beat her opponent. Von Bertouch was a class above many of her competitors, using her experience and leadership to dictate space in the attacking third and create opportunities inside the goal circle. She worked hard to secure prime position at the top of the circle while also plying her trade defensively to limit her opponents’ free-flowing movement. The former Diamond had speed to burn along with high endurance, allowing her to run the court with ease and making her hard to stop when on song. Credit to her dominance on the international scene, von Bertouch led the Diamonds to back-to-back World Cup victories while also being handed the reins as inaugural captain of the Adelaide Thunderbirds. She was dynamic across the court, often instigating the forward thrusts and threading the ball through the defensive pressure.

#3 Madi Browne
Browne is the gift that keeps on giving, able to deliver on both an international and domestic stage. Despite donning the wing attack bib more often in the latter half of her career the talented midcourt player can also cause damage in centre, using her signature balks and vision to pierce the defensive unit. She is strong around the circle edge, able to ward off her opponents and command the ball to allow the goalers to reposition. Browne is not afraid to deliver risky passes credit to her high level of execution and netball nous. Her timing and acceleration is a key element of her gameplay, able to break away from defenders and create free space. Although she is not the most athletic player her smarts and ball use are second to none, hardly ever wasting a ball. Throughout her time with the Diamonds, Browne won a gold and silver medal from the 2014 and 2018 Commonwealth Games respectively.

#4 Lauren Nourse
It is hard to deny the brilliance and craftiness of the former Queensland Firebirds and Diamonds midcourt star. Although she suffered her fair share of injuries throughout her career she provided plenty of magic moments, able to deliver the ball with precision. She fought hard to claim prime position on the circle edge and used her speed to dart around the court and have an impact at every stage. Her on-court leadership was a crucial element of her game play, often directing traffic in the attacking third. Nourse was dynamic across the court, able to set up plays and use her quick footwork to manoeuvre around her player to receive the ball. She won a Commonwealth Games gold medal in 2007 and continued that dominant form at a domestic level, leading the Firebirds to multiple finals appearances.

#5 Kim Ravaillion
The former Queensland Firebirds centre and now Collingwood midcourter has speed and endurance to boot. Ravaillion is renowned for her ability to run her opponent ragged credit to her impressive stamina and tagging mindset. While she is not the most attacking centre the defensive work she does off the centre pass is second to none, clogging up space and using her three-foot marking to block the vision of her opponents. Despite not being the flashiest player she has proven to be a key cog through the midcourt and often acting as the link between the defence and attacking end. In her prime you could always count on her to pull something out of the bag and hunt any cross-court ball that came her way. Her speed on transition is second to none while her crafty ball placement in the circle is a key feature of her game, able to release with confidence. At 26 she already has a Commonwealth gold and silver medal to her name and will be looking to add to her collection in years coming.