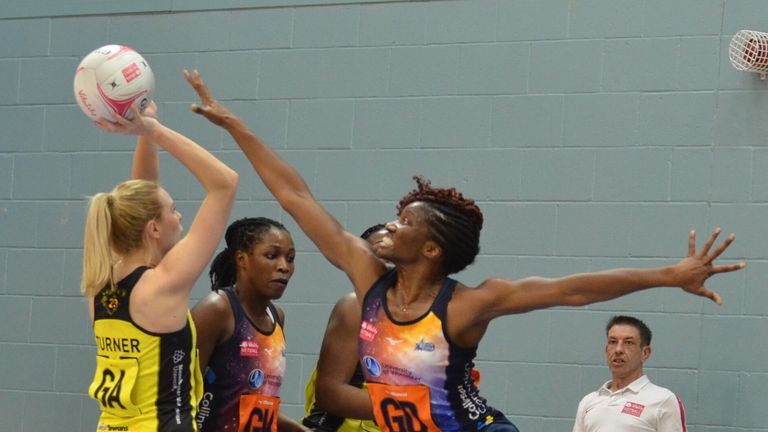 THERE are a host of international players across the world that, much like a fine wine, have simply gotten better with age. With netball on hold due to the COVID-19 outbreak, Draft Central takes a look at players that fall into the category of over 30 and still have plenty in the tank given their on-court prowess. Former England Roses captain Ama Agbeze comes in at number 18 on the countdown.

At 37-years-old, Agbeze is nudging the 40 milestone but is still one of the most reliable defenders to come out of England with her hands over pressure, lean over the shot and quick footwork across the court. Her ability to have an impact both in goal keeper and goal defence is what makes her such a talented player.

Her on court presence is not to be underestimated with the defender able to lead from the front with her netball smarts and impressive vision. She is not afraid to go out hunting for the ball and uses her long limbs to disrupt the attacking forays of the opposition team. The 184cm keeper has a strong aerial presence able to get up to the high balls and pluck them off while her attacking mindset allows her to propel the ball back down the court. Despite not being included in the 2019 Roses World Cup squad, Agbeze has not showed any signs of slowing down plying her trade in the Vitality Netball Superleague (VNSL) with the Severn Stars.

Her cool, calm and collected mentality on court allows her to take control and dictate the space in the defensive third. While she is not the most physical defender, Agbeze has proven that she is no push over able to hold her own in the goal circle and force doubt in the feeders minds with her intercepting ability and desperation to create a turnover.

She has been a key figure in the Roses side for years with her connection with Geva Mentor and Eboni Usoro-Brown a prominent reason for their success in the 2018 Commonwealth Games. Her ability to rotate through the circle and have a profound impact with her strength and skill to nullify the goalers influence under the post makes a challenge to match up against.