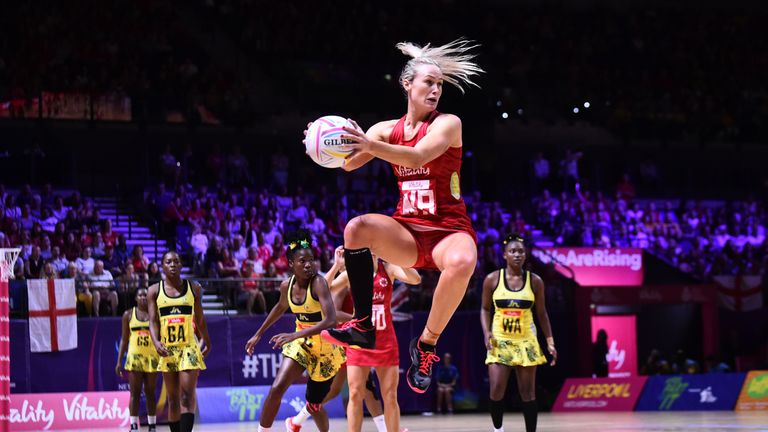 THERE are a host of international players across the world that, much like a fine wine, have simply gotten better with age. With netball on hold due to the COVID-19 outbreak, Draft Central takes a look at players that fall into the category of over 30 and still have plenty in the tank given their on-court prowess. Coming up next at number 15 is Australian Diamond-turned-England Rose, Chelsea Pitman.

A leader at the Adelaide Thunderbirds and a quality midcourter for the Roses, Pitman is a crafty and creative offensive option for England. A clean and deadly wing attack when she is on song, Pitman forms a crucial cog in attack with an ability to jump into the circle if required, but has really honed her craft on circle edge. While the Roses typically have versatile players who can rotate through every position, Pitman is one of the few who plays wing attack and sticks to it, having the ability to adapt to her opposition and create a formidable attacker with her speed off the mark, game smarts and clean movement. While Pitman started her international journey with Australia, the New South Wales born wing attack has dual citizenship and by this point has played a significant part of her international career with the Roses, including the Commonwealth Games gold medal against her home nation.

With quick footwork and circle work to boot, Pitman has an innate ability to read the play and always be a few steps ahead, creating a tough option on circle edge thanks to her tenacity to find the ball and ability to all but serve it on a silver platter to her goalers. Pitman can have a major impact in a short time thanks to her precision and pin-point accuracy, able to manoeuvre around her defender with ease and use her quick hands to fire passes into the circle left, right and centre.

While Pitman is a predominantly offensive player, she can apply pressure with her excellent hands-over and three foot marking through the midcourt, shadowing her player to force them into crowded space and adapt well to the defensive mindset. Her ability to adapt does not only go for her transition to defence, but also her ability to work with her fellow attackers and defenders to form a crucial blockage through the centre third, filling in the holes that her more defensive-minded midcourters such as Serena Guthrie and Jade Clarke would not have so readily at their disposal.