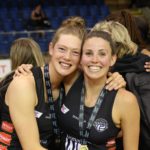 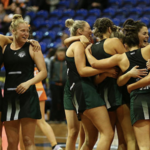 HAVING never previously made it to the finals, the Tasmanian Magpies took the Canberra GIANTS by storm to claim a one-goal victory, 54-53. Finishing the regular season in third place, the Magpies pulled out all the stops knocking over the New South Wales (NSW) Waratahs and then the GIANTS to get their hands on their first premiership.

With plenty of talent across the court and on the bench, Tasmania had the ability to substitute players in and out of the game. Former Collingwood goal attack Cody Lange found herself on the bench after a slow start only netting four goals in the first quarter, prompting the call-up of Gabrielle Sinclair. The goal attack made her presence felt on the court, nailing 13 goals from 16 attempts. Her dynamism on the court provided a spark for the Magpies front-end with her speed helping to open space in the goal circle. One constant was shooting machine Jane Cook who at 201cm dominated, nailing 37 goals from 45 attempts. Down on her volume from the previous week netting 55 goals, Cook still demanded the ball and used her body well to position inside the circle.

While the shooting end was impressive for the Magpies, the defensive work did not go unnoticed with goal defence Sharni Lambden taking an important intercept to push out the buffer for Tasmania in the third quarter. Tasmania’s defensive efforts were not the only ones that were noticeable on the day, with the likes of Canberra young gun, Amy Parmenter leaving her mark on the game taking a big intercept to keep scores close.

The Magpies did not have it all their own way with the GIANTS putting up a hell of a fight to come within a goal in the dying seconds. With what seemed like a comfortable four-goal lead at the last break Canberra worked tirelessly to keep themselves in the game falling just short. Thanks to the impressive defensive effort of the GIANTS players such as Maddie Hay got busy getting hands to ball and getting a timely deflection to keep her side in the hunt for the win.

Up the shooting end for the GIANTS, Georgia Marshall and Beryl Friday proved that volume seemed to be no issue putting up 67 attempts between the two. The rotation through the circle allowed for space to open up and provided greater variety in the goal circle for the feeders. The moving circle also created more confusion for the defenders allowing the two shooters to control the tempo. But in the end it was the desperation from the Magpies that helped them etch their name in ANL history securing their first ever premiership. 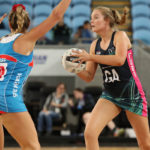 THE Australian Netball League (ANL) plays a big role in providing the Suncorp Super Netball League with access to players as each club has a direct correlation with an ANL team. The ANL allows for players to be elevated to the elite level if needed and is imperative in setting up a competitive league.

Canberra is directly linked to the GWS GIANTS in the Suncorp Super Netball League and much like their counterparts they had a solid season, finishing in fourth position with nine wins. The GIANTS fell agonisingly short in the grand final but the shooting trio of Kiera Austin, Angelina Frketic and Beryl Friday proved to be a handful to contain showcasing their accuracy to post and ability to hurt opposition teams on the scoreboard. Promising defender, Teigan O’Shannassy was also important for the GIANTS with her ability to read the play and get hands to ball.

The NSW Swifts are affiliated with the Waratahs and put out a strong season to claim second spot on the ladder. They racked up ten wins only losing in Round 1 and Round 4 to Victorian Fury and the Tasmanian Magpies. 16-year-old, young gun, Matisse Letherbarrow was a revelation in the shooting circle along with Alison Miller with accuracy proving to be no challenge for either of them. The inclusion of AFLW player, Elle Bennetts into the side has been a real positive for the Waratahs as she offers great strength through the midcourt. Bennetts also has a lot of experience having played with Victorian Fury for four seasons.

The Fusion had a tough trot finishing seventh, racking up a mere three wins for the season. The feeder club for the Queensland Firebirds bred some up and coming stars with the likes of Maddie Hinchliffe, twin sister of Firebirds goal defence Tara Hinchliffe, getting her opportunity to prove her worth on the court. While the likes of goal attack, Tippah Dwan and Amy Sommerville put in a big season and showed why they could be a real force to be reckoned with more experience and time on the court. Laura Clemesha was also solid down in defence for Queensland with her ability to read the play.

The Southern Force just fell short of the finals finishing the year in fifth spot but have showed plenty of promise with players such as Sasha Glasgow making her debut for the Adelaide Thunderbirds. Glasgow proved to be a pivotal player in the goal circle with her clever movement and ability to hit the scoreboard. Young versatile centre court player, Gia Abernethy impressed with her speed and agility while Abigail Meafou was also important for the Force shooting plenty of goals. The Force also saw New Zealand goal shooter Cat Tuivaiti make her much awaited come back after tearing her ACL. The Silver Fern played an important role in the goal circle providing plenty of class and experience for the young team.

The Tasmanian Magpies had a much better season than their Suncorp partners the Collingwood Magpies, taking out the 2018 ANL premiership. After finishing in third spot the Magpies fought tooth and nail to secure the grand final win. With the likes of Cody Lange who has Suncorp Super Netball experience along with Jane Cook and Gabrielle Sinclair the shooting combination worked effectively for the Magpies posting some impressive totals. Defensively Melissa Bragg and Sharni Lamben also showcased their skills applying plenty of pressure and hustle to win the loose ball. Kelsie Rainbow was also lethal in the midcourt for Tasmania with her impressive speed and ability to get clever deflections.

The Storms performance throughout the season was completely different to their Suncorp club the Sunshine Coast Lightning who won the premiership. The Storm finished at the bottom of the ladder only managing one win for the season. Cara Koenen was an important player for the Storm contributing plenty of goals to their total when she was named in the team. Koenen is a smooth mover and can open up space in the goal circle. New Zealand defender Erena Mikaere was also valuable for Territory credit to her height, ability to read the play and willingness to get involved in the contest on the court.

Melbourne Vixens are connected to the Fury allowing for players such as Samantha Gooden to shine and be prepared for a call up to the Suncorp league when needed. Gooden starred throughout the season with her clever movement, strong hands and more importantly ability to sink goals when it counted. The Fury continued their hot form finishing at the top of the table after another impressive season but unfortunately fell short when it came to finals unable to make it to the big dance. Jacqueline Newton was also consistent down in defence for her side.

The Western Sting are affiliated with the West Coast Fever and have plenty of up and coming young talent. The Sting have been lucky enough to taste success winning the premiership in 2017 after overcoming the Victorian Fury in what was an impressive performance, but they failed to maintain that dominance in season 2018 finishing in sixth spot. The Sting only managed to win four games for the year but the likes of Tess Cransberg and Kaylia Stanton stood tall in the goal circle. Annika Lee-Jones also provided a good presence down in defence for the Western Sting with the rangy defender using her height and long arms to intimidate the shooters.