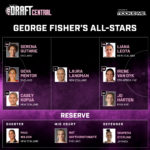 CONTINUING our theme of All-Star teams, England Roses and Saracens Mavericks shooting dynamo, George Fisher compiled her own dream team. Take a look at her selections and reasoning behind each player.

When I was first asked to put together my All-Star team by Netball Draft Central, I was really excited at the prospect of completing this. However when I actually started to pick my team, I realised just how hard it was with the calibre of players past, present and coming through. I could have picked at least four for every position.

So this is what I ended up with, and I would so love to see this team perform for real!

I had to start with the legendary Irene Van Dyk. This decision pretty much speaks for itself, being one of the most capped international players of all time, with her flair, athleticism and by God the way she takes a ball, not to mention her accuracy at shot and her cool and calm attitude, I just couldn’t start with anyone else.

So joining Van Dyk in the D is none other than Jo Harten. Most people see her as a goal shooter but I really enjoy watching her out on court. She has so much flair and passion and the will to win. She is always someone you want on your side and paired with Van Dyk in the D, there will not be any loose balls that don’t end up in their hands, with trick passes, amazing catching and shot accuracy, this would be my dream shooting team.

So up next is wing attack. I really struggled with this position with the likes of Tamsin Greenway, Liz Watson, Nat Haythornthwaite, Bongiwe Msomi and Chelsea Pitman in the mix, but I’ve finally gone for Liana Leota, someone who I personally have thoroughly enjoyed watching over the past few years in the Vitality Superleague. Her court craft, game knowledge, leadership paired with her decision-making ability to land on edge of the D and deliver killer balls to the shooters make her my wing attack. And all this while being the mother to five children, what a total inspiration to all sportswomen!

We come to the centre and for me it’s always a toss-up between Serena Guthrie or Laura Langman to who will have which bib, centre or wing defence? I’ve put Langman as my centre as she is a total powerhouse. Strong, quick, able to bring the ball up court, feed the D with ease and bringing an air of calm to the whole team.

No team is complete without a Serena Guthrie – what a legend and not just for her on court ability. She would be in my wing defence bib for her never ending energy and grit on court to turn that ball over in any way possible. Watching her pick off balls, not just off the circle edge but all through court, with an athleticism that is unmatched is just incredible.

Now leading onto my goal defence, Casey Kopua. Her agility through the court at her height is phenomenal, matched with her ability to read the game and pull off interceptions is a game changer. Not only is she a danger out on court but her ability to sight turnovers in the D will put doubt into any feeder’s mind.

And goal keeper – again lots in the mix but came down to a choice of two, Laura Geitz or Geva Mentor to complete my team. For me it has to be Geva Mentor, strong, powerful, calm and a crucial interception maker. With her long reach and her elevation she puts doubt into the shooters’ mind and is a demon at taking those rebounds and paired with Kopua – what a total dream team.

So who’s on my bench! I’ve gone for a younger bench with players that have already made a massive mark on the international scene and I think are becoming total legends of our game. I’ve selected Maia Wilson as I thought she was outstanding at the Nations Cup and is really starting to hold down the front end for the Ferns. And up at the other end we have Shamera Sterling with her rangy frame and complete natural ability to play netball, she puts doubt in the feeders by confusing space so well and more often than not will come out with the ball. I also loved seeing her out at goal defence so two options in one. That leads me onto my final player Nat Haythornthwaite, not only does she have the fastest feet I have ever seen and a never give up attitude, she has the ability to nail the wing attack position but also step into the goal attack role seamlessly. Plus she is one of the nicest people I have ever met and helped me to grow into my shooting role at Wasps Superleague when I was just 17.

So that’s my All Star team! As I said before, it has been so hard to pick just the one player for each position due to the phenomenal past and present players that have influenced our game.

Do you know what, I really love our sport.