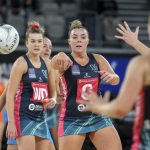 A NEW addition to the Melbourne Vixens ranks in 2020, training partner Elle McDonald has had an explosive past year, selected for the 2019 Vic Fury squad in the Australian Netball League (ANL) and subsequently getting the call up to the Vixens for the 2020 Suncorp Super Netball season.

McDonald has not followed the typical state talent pathway, instead working her way up the ranks through the Victorian Netball League (VNL), honing her craft through the Under-19s to division one and then championship, winning a premiership with North East Blaze in 2017.

“When I was younger I didn’t go through the state teams pathway that most of the other athletes would have but I was really lucky to still be playing in the VNL. And I thought I’d just work my way through the Under 19 Division and then was aiming for playing in that championship team and then once I was playing that championship team I was, you know, always trying to do the best I can,” McDonald said. “From there, I kept pushing myself and was lucky enough to be named in the team of the year for the last two years, I think, so I’ve just always been trying to improve myself and go one step further.”

The speedy midcourter has no issue traversing the court, able to ply her trade in both centre and wing attack, using her speed off the mark to enter the contest and be a real workhorse in attack.

“Last year I was really lucky to be asked to play in the ANL with Vic Fury, and win the Premiership with them too … I’ve loved every minute of it and it’s been challenging, of course, I’ve had my setbacks like many other people but in a way it just made me work harder and stronger and become a better player.”

But what should have been an exciting start to the year with Super Netball coming up, has been put on hold due to the COVID-19 pandemic, with teams having to switch out regular face-to-face training for backyard workouts and video meetings.

“Yeah, it’s been challenging, but also good I think. Obviously having to train by yourself is very different, especially being used to a team sport and really supporting each other through tough training sessions and things like that,” McDonald said. “I think we’ve been very accountable, and we knew how important it was to maintain our fitness levels during isolation so we can come back as strong as possible when we were allowed to.”

Despite the challenge of taking on her first season of elite training at home, McDonald said that the team was able to conduct virtual training sessions via Zoom.

“I think we were lucky to try and squeeze in … things like that, to really get our feet moving, doing lots of footwork and ball skills against the wall or someone at home, if you had someone to pass with you occasionally, that was really helpful and I think for me, really important to try and keep up.”

That being said, the Vixens are back regularly training now meaning the midcourter can really work on those skills with a plethora of experienced players to learn off, with the likes of Liz Watson and Kate Moloney two prominent figures in the Vixens midcourt unit.

“Just being part of that environment is quite surreal sometimes but I think having role models like that to look up to and, as you said they’re so experienced, but they’re also just so encouraging and they’re really supportive of everyone.I think just being able to train alongside them and be challenged and challenge them is totally our role as a training partner and, yeah, as I said, it’s just such a good and professional environment to be a part of. I’ve been loving every minute of being part of the Vixens.”

McDonald said she is in the team to become the best player she can be, always pushing herself regardless of the level. While she has been exposed to elite pathways in the VNL and ANL along with the impressive coaching at that level, the midcourter says that the training environment with the Vixens is “amazing”.

“I just want to, you know, learn as much as I can from the coaches and the players that we have there … I’ve never had access to the facilities and the strength and conditioning coaches and programs that are put in place before, so I’m really just trying to make the most of it and just absorb as much as I can in that training environment.”

“I think we have been chosen as training partners for a reason. I think they obviously see some potential in us and we want to, you know, be the best we can,” McDonald said. “When you are going up against one of those experienced international players [you want to] to challenge them, because the more we challenge them the better we become as well.”

With significant breaks between seasons, many players pick up other fitness regimes and exercise to do away from the netball court. But for McDonald, mixed netball was a great way to keep up that match fitness and skill over the off-season, drawn to the speed and physicality of the game.

“I played mixed my last year of high school. I sort of was introduced to it and I just thought it would be fun, would get to play with a few of my friends and then I quickly realised just how talented some of the mens and mixed netballers were and how competitive that league was,” McDonald explained. “So to me, when the VNL season stopped, being able to play in the M-League competition was a really good opportunity.”

McDonald was part of the grand final winning Parkville Panthers in the 2019 Victorian M-League Mixed Premier Division, winning the female most valuable player award for the season. She said the physicality of the mixed competition helped improve her speed and ability to attack the ball strongly.

“I think it’s definitely improved my speed, just because I found like some of the boys, you know, they’re very athletic so being able to just turn and feed things quickly. As well as that, the physicality – just really having to claim that ball and pull in strong with two hands.”

While the 2020 ANL season will not go ahead, McDonald will hope to continue improving with the Vixens and prove herself among the main group, still able to play in the VNL this year. With the addition of rolling subs and the two goal Super Shot to the Super Netball season, the midcourter said that the Vixens are one of the teams in a good position with the wealth of talent at their disposal.

“I’m sure they [the Vixens] will adapt to whatever they need to, in a really positive way and I think if you look at the shooters in that team, you know, they’re very lucky to have some accurate long-bomb shooters.”