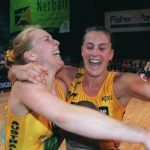 THE next instalment in the Draft Central Compare the Pair series will aim to analyse two fan favourites from different eras across the netball world, with the next showcasing wing attacks, Australian Shelley O’Donnell and South African captain, Bongi Msomi.

Both zippy attackers who can change the course of a game in a split second, O’Donnell and Msomi are dominant midcourters with plenty of speed to find circle edge. Though hitting the court with different builds, both players are tough to take on with tenacity and intensity to boot creating an interesting matchup here given their respective strengths. Both able to ply their trade in either centre or wing attack, their versatility and speed makes them threatening fixtures on court.

A three-time world champion, O’Donnell used her clever netball nous to find the ball with ease, consistently able to create something out of nothing with her speed and ability to find space. O’Donnell’s strong build allowed her to body up on her opposition and transition from midcourt attack to defence in a split second, using her read of the play to switch up with ease. Her ability to adapt to the play was second to none, using her vision and cleanliness to serve the ball on a silver player to her goalers. With a stellar drive down court and the speed to back it up, O’Donnell was one to watch on court with her endurance and ability to get the job done. O’Donnell served the Diamonds for just under 10 years, and it was a credit to her ability to ply her trade with ease that saw her collect over 80 international caps.

Speedster Msomi is an energiser bunny who can just go and go, using her speed to take the ball with ease and zip away before her defender is aware she had the ball. With plenty of experience under her belt and the agility to keep going, expect Msomi to continue plying her trade with her quick feet and ability to find circle edge doing wonders for the Spar Proteas. With a smaller build to go with her quick feet, Msomi has an innate ability to find herself exactly where the ball needs to be, using her game awareness to find the netball with ease and evade her opposition. With over 100 caps to her name, Msomi has spurred her nation on time and time again with her consistency and constant drive to go one better, forming a crucial role through the midcourt.