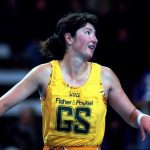 THE next instalment in the Draft Central Compare the Pair series will aim to analyse two fan favourites from different eras across the netball world, with the next showcasing game-changing goal shooters, ex-Australian captain Vicki Wilson and South African star Lenize Potgieter.

Two quality names and big ones for their respective nations, Wilson and Potgieter are both influential in the way they use the ball and while not the most versatile goalers, staying put generally in goal shooter, their consistency and ability to find the ball is and was second to none. With plenty of adaptability on the court to take on their respective tenacious opposition, their respective footwork and ability to turn a game on its head makes the crafty pair massive threats. Able to form connections with any number of attacking players, both were able to create crucial links to the circle and find the post with ease.

With the uncanny ability to not only apply scoreboard pressure but also do it from any range inside the circle, Wilson was a crucial member of the Diamonds with her clean hands and footwork. Able to evade her opposition with ease thanks to her quick wits and vision of the play, Wilson was the first Australian to hit 100 international caps thanks to her ability to be a constant threat. Her volume to post was what set her apart from other goalers of her time, racking up a constant tally and using her consistency to be a formidable option at the post. While not always the most accurate, she had that never say die attitude which led her and the Diamonds to three straight World Netball Championship titles in the 1990s.

Unconventional in her goaling action, Potgieter is a clean and efficient goaler with accuracy and plenty of volume. Like Wilson, she is cool, calm and collected under the post, using her netball nous to adapt to the situation and apply constant pressure on her defender thanks to her ability to find the ball right where she wants it under the post. Her atypical, low shooting action sees her use her quickfire motion to evade the long reach of her defenders while her speed and agility to get into the best positioning allows her to receive the ball on a silver platter. Not the tallest goal shooter, Potgieter uses her smooth moving to be a formidable pressure in the goal circle and create a key cog for both the South Africa SPAR Proteas and her new side, Adelaide Thunderbirds.