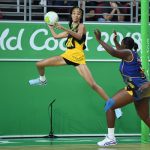 THE next instalment in the Draft Central Compare the Pair series will aim to analyse two fan favourites from different eras across the netball world, with the next showcasing goal keepers, ex-Australian Diamonds captain Laura Geitz and Jamaican superstar, Shamera Sterling.

Two tenacious defenders, that while they have different ways of going about their game still provide plenty of similarities such as their respective ability to turn over the ball with ease and anticipate openings to go for that massive intercept. Another glaring similarity is their ability to turn a game on its head, propelling the ball forward and generating further momentum with their big grabs and stellar footwork to get around the player and deflect the ball.

Up there with Liz Ellis as one of the great goal keepers, Geitz is one of those players who has gone down in history for her ability to not only apply pressure to her player one on one but also use her leadership to control the play to win games off her own back. Geitz also formed a formidable and crucial element in any team she played with thanks to her experience and netball nous, able to be a consistent figure down back and use her cleanliness to disrupt play with ease. She was not afraid to contest the loose ball, using her speed off the mark and clean hands to scoop the ball up to safety. Geitz was a general in goal keeper, always ready and looking for that cross-court ball to intercept and was able to be a huge threat even when her timing was off – if rarely – to stay back on her player and apply pressure over the shot. Her long arms and lean over the shot caused plenty of headaches for goalers while her quick footwork shut down any easy access into the attacking third.

Sterling may not have anywhere near as much experience as Geitz collected over the years, but in her short time on the international stage she has lit up the court with the immense skill she possesses. While not the cleanest player, Sterling has plenty of time for her development and has ultimately come along in leaps and bounds over the last year, honing her craft to still provide that same constant pressure but stay away from the whistle a fraction. A threatening player with long limbs and go-go gadget arms to cherry pick the ball from midair, Sterling has proved time and time again that she can contest and challenge even the greatest goalers in the world with her ability to confuse the feeder and find the intercept, while she is also able to gather the ball with speed to get it back in the safe hands of her attackers.