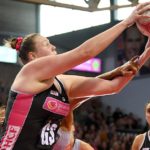 WITH a number of netball leagues across the world being suspended due to COVID-19, the Draft Central team is making a case for the top 15 training partners stepping up to the Suncorp Super Netball plate in 2020. This countdown is purely opinion-based, taking into consideration recent form, individual potential and future development. Coming in at number one is none other than Collingwood Magpies goaler Emma Ryde, a dominant performer who has been unlucky to not receive a consistent contract at Suncorp Super Netball level.

Named the 2019 Australian Netball League (ANL) MVP, Ryde was crucial in the Victorian Fury outfit as a holding goaler, able to use her body cleanly to attract the defender and use the space to get hands to ball. With clean hands, accuracy and height to match, there is no denying the impact Ryde has when she takes the court. The 22-year-old made a fantastic return to netball in 2019 after taking time off for injury, using her netball smarts to take her game to a new level and ultimately playing at each level last year. At 197cm, Ryde can be a real target at the post with her ability to take on the contest, and with a strong work ethic and tactical mindset she can be a threat taking on any opposition.

Coming up through the Victorian netball pathways, Ryde was snatched up by the Adelaide Thunderbirds as an injury replacement player in 2019, picking up a few domestic caps along the way although injury cut her time short. Playing four matches for the ailing Thunderbirds, Ryde shot 66 goals at 93 per cent accuracy, well and truly making herself known to the league as a handy option who can jump on court and have an impact. Ryde has also trained and played with Melbourne Vixens in the past, gaining valuable experience and court time and making for an impressive resume despite not taking the court consistently in the Super Netball.

Season 2020 sees Ryde join forces with Collingwood Magpies as a training partner, returning to Victoria once more and with the opportunity to learn from crafty veteran Nat Medhurst and Jamaican young gun Shimona Nelson, among a smattering of young Magpies stars coming up through the pathways. Still young and with plenty of potential, Ryde has plenty left in the tank and will hope to prove herself on the Super Netball stage once more in 2020.