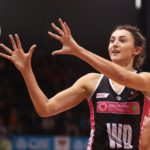 WITH a number of netball leagues across the world being suspended due to COVID-19, the Draft Central team is making a case for the top 15 training partners stepping up to the Suncorp Super Netball plate in 2020. Coming in at number two is injured Adelaide Thunderbirds and England Roses midcourter, Beth Cobden. This countdown is purely opinion-based, taking into consideration recent form, individual potential and future development.

While a somewhat contentious and questionable player to not make the top of the list given she has international caps with the Roses, Cobden is only a training partner while she is currently down and out of the squad with an anterior cruciate ligament (ACL) injury, the likelihood of her making the cut earlier in the Super Netball season is questionable because she is still going through rehabilitation. However, the aim with Cobden being a training partner is to enable her to work back up to match fitness through the Australian Netball League (ANL), which could see her return to the fray at some point during the season.

A highly talented defensive midcourter, Cobden’s speed and agility allows her to impact both on and off the ball, using her lithe frame and tactical mindset to create plays down the court. With plenty of experience behind her, the 27-year-old midcourter can dominate by shutting down her attacker, not always playing the obvious game by intercepting and deflecting but instead using her body work to block easy drives.

With plenty of versatility to rotate through the midcourt, Cobden is just about a shoe-in to make it onto the Super Netball stage once more in 2020 if a position opens up, able to have an impact in any midcourt position thanks to her clever read of the play and ability to transition between attacking and defensive mindsets.

Thanks to solid Roses partnerships across the court – namely Chelsea Pitman through the midcourt and Layla Guscoth and Kate Shimmin in defence – not to mention Cobden played and trained with the Thunderbirds before she went down to injury last year, Cobden will well and truly slot right into the side if she is required.