WITH a host of young talent littered throughout the ANZ Premiership competition Draft Central takes a look at one key player each week. This week Southern Steel midcourter Kate Heffernan is in the spotlight, with the wing defence playing her role well over the past few weeks and upping her pressure.

A versatile midcourter, 20-year-old Heffernan has set herself up for a solid season with her improved speed and movement in her second year with the Steel. With a proven work ethic and plenty of drive to go better than her last effort, Heffernan has been a crucial link-up in wing defence this season, plying her trade for much of the season down back and using her attacking ability to drive the ball back up the court where required. Elite netball runs in the Heffernan family, with mother Annette Heffernan a Silver Fern of the 1980s, while twin sister Georgia also took the court for the Steel this season before a devastating anterior cruciate ligament (ACL) injury cut her season short.

On the taller side for a midcourter, Heffernan uses her long wingspan to reach for the loose ball and play a blocking defensive game, able to cut off her opposition with her unsuspectingly quick footwork as well as block vision down the court. Patient with ball in hand and able to ply her trade across any midcourt position after transitioning to wing defence from centre last season, Heffernan plays with plenty of intensity to create loose ball and provide defensive gets for her teammates down back.

While not always having a huge match on the stats sheet, Heffernan proves her necessity on the court with her ability to shut down attackers, once again using her height to limit vision. She is able to track her wing attack around the court regardless of their speed, with her long legs allowing her to stay a step ahead. This was evident in her Round 7 effort against Northern Mystics, with the young talent shutting down livewire Peta Toeava leading to the wing attack’s removal from the court, which was a crucial point for the Steel’s victory.

Heffernan’s ability to disrupt play is crucial while her ability to stay away from the whistle is just as impressive, averaging about seven penalties per game and with just eight turnovers to her name across her 10 matches, indicating her cleanliness with ball in hand. Pairing up well with Shannon Saunders in centre, Heffernan has developed her craft with Saunders’ help, becoming a more dogged and influential player every time she takes the court. Heffernan’s turn of speed has allowed her to rack up 23 deflections, 12 pickups and 10 intercepts for the season, consistently providing that extra defensive layer down back and limiting the work Te Huinga Selby-Rickit and Taneisha Fifita have to do outside the circle.

In Round 8, expect Heffernan to maintain that work rate against some quality opposition, first taking on Northern Stars’ Grace Kara on Saturday evening – with the Stars coming off a hefty loss – before facing Whitney Souness and a hungry Waikato Bay of Plenty Magic side on Monday night. Both players are high-impact players but their sides have been shut down fairly well this season when the wing attack has been limited at circle edge, meaning Heffernan’s job could be the game-changer on both occasions. 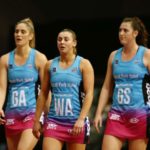 BACK to back ANZ Premiership premiers, the Southern Steel will
begin mounting their campaign for a third title tomorrow. On paper, it is not hard to see why the Steel are the competition’s most formidable force. Head Coach, Reinga Bloxham has put together a very solid roster during her time with the team, boasting notable depth and versatility across the midcourt, even with the retirement of Wendy Frew at the end of last season.

There is a lot to like about the Southern Steel, and with their entire grand final starting line-up sticking around for another year, they could once again be a force to be reckoned with. Off the back of an incredible season, several of last year’s injury replacements are now fully-contracted players, while Gina Crampton and Te Huinga Reo Selby-Rickit find themselves taking the reigns as co-captains.

Crampton enters her eighth season with the Southern Steel, riding high on a recent Silver Ferns call-up. The experienced wing attack notched up an incredible 1011 minutes on court last season, a credit to her consistent form and strong drive off the line. An inaugural member of the Southern Steel, Te Huinga Reo Selby-Rickit returned to the club in 2016 and quickly marked herself as a key part of the defensive end. The defender has an impressive reach and a knack for reading the play making her an asset down back.

Long term loyalty is a running theme for the Steel, as fellow midcourter Shannon Saunders marks her own eighth season with the club. Driven and relentless, this Silver Fern has been a key part of the team since she first joined in 2012 and looks likely to continue. Te Paea Selby-Rickit meanwhile has spent her entire nine-year career with the Southern Steel. With height, movement and clever offloading all in her favour, the Silver Ferns shooter works well in the goal circle, where she spent over a thousand minutes last season.

On the younger end of the scale, Abby Erwood has proven herself as a strong and consistent part of the Steel defensive end. Four seasons in, she continues to build and develop, providing Bloxham with options in the in-circle. Up the other end of the court, Jennifer O’Connell is a towering presence. Standing at 193cm she is a good start for any prospective goal shooter, and it only gets better when backed up by jump and accuracy. Her first season as a regular starting player was a remarkable success last year, with the young shooter netting 563 goals at a percentage of 85.70. With the additional court time and a call up to the 2018-19 Silver Ferns Development Squad, O’Connell is one to watch.

Last season’s injury replacements have done very well for themselves heading into the new year, with no less than three awarded full-time contracts with the Southern Steel. White Ferns cricketer Kate Heffernan and daughter of Silver Ferns star Annette Heffernan, is just one of the exciting recruits credit to her height, reach and disruptive presence through the midcourt.

Kendall McMinn is another promising force in the midcourt, an existing training partner promoted to the elite ranks after an impressive performance in the Beko Netball League last year. Goal keeper, Courtney Elliott rounds out the group, capable of some tight marking and strong defensive play. Like O’Connell, the 2016 Secondary School Player of the Year has also earned a call up to the Silver Ferns Development Squad.

Snared from the Magic, the addition of South African shooting legend Lenize Potgieter is a huge win for the Steel. The prolific shooter is accurate under the post recording an impressive 92.10 goal percentage over the last two years in the ANZ Premiership making her a key target in the circle. With such a solid midcourt to feed from, Potgieter is set to do very well with the competition’s reigning premiers.

Can Southern make it three in a row, or will another team steal away the premiership?