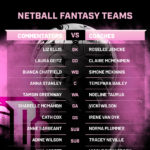 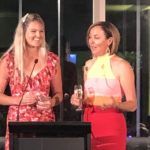 AUSTRALIAN Diamonds’ shooter Gretel Tippett has capped off a wonderful 2019 season both on the international and Suncorp Super Netball (SSN) scenes to take home a number of gongs at the 2019 Netball Australia Awards. The goal attack was deemed the top performing international Australian Diamonds athlete throughout the 2019 season, taking out both the International Player of the Year Award and the Liz Ellis Diamond Award – becoming the first goal attack to do so. The Queensland Firebirds’ goaler also picked up a starting spot in the SSN Team of the Year and earned a nomination in the SSN Player of the Year despite her side finishing on the bottom of the table.

For the Firebirds, Tippett shot 394 goals from 411 attempts at an elite 96 per cent accuracy. She also picked up 325 centre pass receives, 130 assists and 10 rebounds this season from 14 games. Internationally, Tippett scored 67 goals from 70 attempts in the Northern Quad Series, 118 goals from 125 attempts at the World Cup, and 82 goals from 85 attempts at the recent Constellation Cup. All up, Tippett finished the year with 267 goals from 280 attempts, at a superb 95 per cent accuracy. Earlier in the season she also achieved the rare feat of 100 consecutive goals without a miss in the SSN. She won the International Player of the Year with Melbourne Vixens duo Jo Weston and Liz Watson the other nominees. Caitlin Bassett (100 caps) and Lisa Alexander (100 games as coach) were also recognised for their milestone achievements.

West Coast Fever goal shooting machine Jhaniele Fowler was awarded the SSN Player of the Year, shooting 709 goals from 753 attempts, also picking up 44 rebounds in a side that finished in the bottom three on the table. She won the award with Tippett and Sunshine Coast Lightning’s Karla Pretorius the other nominees. Meanwhile Melbourne Vixens dominated the SSN Team of the Year with a remarkable four players in the 10-player side, with no other side recording more than one player. The Vixens hold the entire midcourt with Watson, Kate Moloney and Renae Ingles, as well as goal keeper Emily Mannix. Joining her in the defensive goal circle is Pretorius, while up in attack it was no surprise to see Fowler and Tippett there. On the bench, NSW Swifts’ Sam Wallace, Collingwood Magpies’ Ash Brazill and Adelaide Thunderbirds’ Shamera Sterling rounded out the team.

GIANTS Netball young gun, Amy Parmenter took out the Rising Star Award for her work in the SSN for 2019. Parmenter made 14 appearances in her first season, racking up 57 deflections, 25 intercepts, 52 centre pass receives and 14 feeds, as well as 10 goal assists.

NSW Swifts’ premiership coach Briony Akle was named the Joyce Brown Coach of the Year for her work in taking the Swifts from the bottom four to a premiership in the space of 12 months. The Swifts finished second overall after the SSN season, and after losing the qualifying final to reigning premiers Sunshine Coast Lightning, bounced back to defeat Melbourne Vixens and then topple the Lightning on the road to claim their first SSN premiership. Announced earlier in the year but congratulated on the night, Victoria Fury’s Emma Ryde was named the Deakin University Australian Netball League (ANL) Player of the Year.

Earlier in the night, Cath Cox thanked the three retiring Australian Diamonds in Renae Ingles, Caitlyn Nevins and Caitlin Thwaites who played a combined 120 matches. Off the court, Anne Sargeant OAM and Margaret Pewtress OAM were elevated to Legends in the Hall of Fame which received a standing ovation from the crowd. Two netball icons were also inducted into the Hall of Fame, with Elsma Merillo and Sharelle McMahon earning deserved places. Stacey Campton was awarded a Service Award for her work with Indigenous communities and umpiring over multiple decades, Michelle Phippard was named the Lorna McConchie Umpire of the Year, as South Australian Georgina Sulley-Beales and West Australian Rochelle McKee were also recognised for their efforts in officiating the code.

SSN Team of the Year: