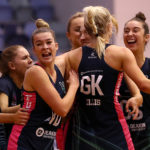 WITH a number of netball leagues across the world being suspended due to COVID-19, the Draft Central team is making a case for the top 15 training partners stepping up to the Suncorp Super Netball plate in 2020. Coming in at number six is Melbourne Vixens midcourter, Allie Smith. This countdown is purely opinion-based, taking into consideration recent form, individual potential and future development.

A crucial midcourter through the star-studded Victorian Fury outfit which won the Australian Netball League premiership last season and having gone two from two with a Geelong Cougars premiership in the Victorian Netball League, Smith is well and truly used to the winning mentality. A talented speedster with quick feet and impressive agility, the Geelong product is only 20 years old with plenty of star power in the making. Typically a midcourt defender with the ability to drop back into the goal circle, Smith can also take on the centre bib when required to have an impact in attack, with her versatility certainly something the Vixens can build up to be a handy extra cog on court.

Smith has plenty of potential with her timing and vision down the court, while her speed and constant pressure allows her to be a threat both inside and outside the goal circle. Coming from a defensive background, Smith is able to turn on the defensive gears up the court to turn over the ball with ease, using her speed and game smarts to chase down the loose ball and combine with defenders and attackers alike. Now in her second season training alongside the likes of Kate Moloney, Liz Watson and Jo Weston, Smith has plenty of opportunity to further develop her craft in the coming season.