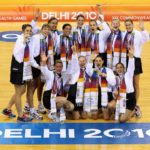 WITH netball taking a back seat to coronavirus in 2020, Draft Central is taking a look back at memorable matches. Next up is the 2010 Commonwealth Games gold medal match in Delhi, India, which saw the 100th test match between the Australian Diamonds and New Zealand Silver Ferns finish in magnificent fashion. For many Australian netball fans, this week’s memorable match is one that would be better left forgotten, with a devastating result for the Diamonds but the ultimate victory for the Ferns.

The two sides were unable to be split from the early stages and though Australia seemed to have the momentum, New Zealand never let up in their tough approach and whittled down the margin bit by bit to keep the Diamonds on their toes. With scores locked at 47 apiece at the end of regular time and the Diamonds fighting from seven goals down in the final term, the match would go on to be one of the longest ever official matches coming to 84 minutes in double extra-time.

Defensively the Aussies were on fire early, with Mo’onia Gerrard leading from the front, collecting loose ball left, right and centre, while Susan Fuhrmann stayed back in the goal circle keeping a crucial eye on Irene van Dyk. But while van Dyk was kept quiet, only shooting the 25 goals, Maria Folau had something to prove, providing that crucial long-range shot to shoot up a storm from anywhere in the circle. Folau finished the match with a whopping 41 goals from 50 attempts, well and truly dominating at the post with her silky movement and ability to not just finish plays, but also create them.

For the Diamonds, captain Sharelle McMahon had a stellar start credit to her cleanliness with ball in hand and quick footwork, aided by Lauren Nourse and Nat Medhurst out in goal attack, with the goaling duo influential against the Ferns’ defensive unit which had a slow start. But as it goes with the likes of Casey Kopua and Katrina Rore, they can never be discredited with the work they do off the ball, working their way into the game and proving to be a massive defensive threat to the Diamonds at the post on every opportunity later in the game to close the margin.

Through the midcourt, Renae Ingles was on fire in the first half blocking Temepara Bailey at every turn and using her hands over pressure and bodywork to force errors which the Diamonds took advantage of, seeing a combined eight crucial deflections from Gerrard and Fuhrmann. New Zealand centre Laura Langman was her usual workhorse self, constantly there to apply pressure on Natalie Bode in centre and create that run down the middle of the court.  The change through the midcourt in the second half had an immediate impact, with Anna Scarlett and Liana Leota replacing Joline Henry and Bailey respectively.

While Australia was ahead for majority of the early stages of the match, New Zealand flipped the switch in the third to lead at three quarter time, leading 35-33 after the major switch up to the midcourt unit saw the Diamonds fade away as tiredness began to set in. Cath Cox and Kim Green entered the court in the final term to have an immediate impact, pairing well with McMahon who topscored for the Diamonds with 30 goals at 88 per cent accuracy. The trio’s ability to move through the space was second to none, while Cox and McMahon’s experience together and respective ability to split and evade their opposition saw the unit play out the rest of the match – almost 25 more minutes than a regular game.

Painful to watch for so many as the clock wound down in the second half of overtime, Australia had its chances to collect the win but the Ferns were just relentless in their pursuit for their second Commonwealth gold, denying Cox a goal to win the match and daring to go into double extra time, with the clock essentially stopped until one team was two goals ahead.

With the overall game time edging over 80 minutes and the two sides still going goal for goal, a final shot from Folau saw the Ferns take out the game with a crucial -and her specialty – long-range shot that rang true to finish in the most dramatic of fashions, ending with the ultimate celebration for the Ferns and devastation for the Aussies, 66-64. The gold medal match came to a head to be one of the greatest matches in recent history between the Trans-Tasman rivals.