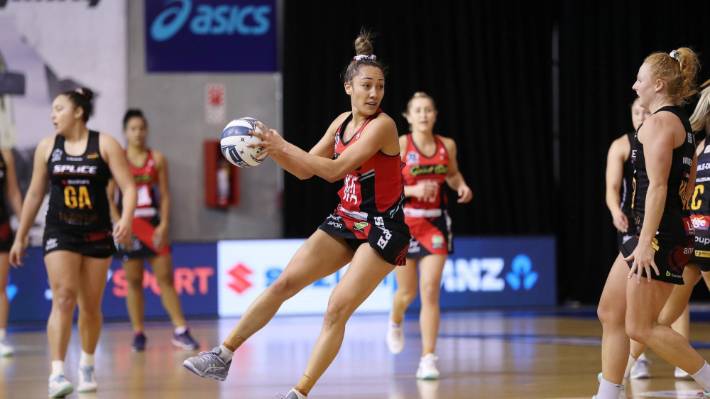 MAINLAND Tactix have temporarily bounced back into third after putting their stomach bug loss to Northern Stars last week behind them to defeat Waikato Bay of Plenty Magic by nine goals last night (45-36). In what was a remarkable defensive performance – the three defenders picked up a combined seven intercepts and four rebounds – the Tactix were able to restrict their opposition to just 36 goals, the equal lowest of the season thus far.

The Tactix were not their regular selves in the Round 2 loss to the Stars, and having played an extra game than the Magic heading into last night’s match, were keen to bounce back with a strong win. It was promising start from the side as Ellie Bird burst out of the blocks with 10 goals from 15 attempts in the opening term, outscoring the Magic side, whilst Te Paea Selby-Rickit played the role of facilitator with four goal assists from five feeds.

Erikana Pedersen had a team-high five goal assists, the same as her opposition wing attack, Whitney Souness. The Magic still managed the nine goals, making the most of their 12 opportunities, but the Tactix attempts were stacking up with a massive 17 in the first term.

The second term was the complete reverse of fortunes for the sides, with Ariana Cable-Dixon taking control of the midcourt alongside Souness as the pair combined for eight goals assists from 14 feeds. Young gun Kimiora Poi was overshadowed in the centre, but Pedersen was doing all she could to feed through to the goalers. Bird put up a more accurate six goals from eight attempts for the quarter, but it was the shared load between Magic goalers Kelsey McPhee and Abigail Latu-Meafou that got their side back on top.

The Magic looked like a different team to the first term with just four general play turnovers – half of their total from the first term – and having 11 goal assists to five. The change in play turned the result around with the Magic heading into the break with a three-goal lead. The inconsistency of the midcourt feeding through to the goalers for the Tactix was one noticeable area to still improve on for next match.

Neither team opted to make a change to its starting line-up heading into the third term, and surprisingly, momentum flowed with the Tactix again as Bird found her range and could hardly miss, sinking nine of 10 chances and even setting up a couple of goals for Selby-Rickit. But it was Selby-Rickit who proved to be a huge influence on the term, nailing all five of her chances, and getting more active with six centre pass receives – almost as many as the entire first half – as well as three goal assists. Pedersen continued her terrific form with another five goals assists, while Poi got back on level terms with Cable-Dixon again.

Holly Fowler had been able to restrict Selby-Rickit up to that point from causing too much damage, but with 19 feeds into the circle, it was coming in fast and furious causing headaches for Fowler and Erena Mikaere. Needless to say, the Magic managed just seven goals with Latu-Meafou shooting the four and McPhee the three as Jane Watson and Temalisi Fakahokotau were able to get more active on defence thanks to the pressure up the court.

The final term saw the good times rolling on for the Tactix who then picked up where they left off in the third, thanks to a 12-7 term. The Tactix had tried to make a few changes with Cable-Dixon coming off after Poi’s big third term, as captain Sam Winders slid into centre. Fowler moved up to wing defence and Jenna O’Sullivan went on into goal defence. Unfortunately, it did not help with O’Sullivan giving up three penalties and one turnover in seven minutes of action to be replaced by Georgia Tong in the final few minutes.

The Tactix did not need to make a change, and it was easy to see why with Watson continuing her attacking approach, whilst Fakahokotau’s work with reading the ball in flight was impressive. Bird sank another eight goals from 11 attempts, with Selby-Rickit having four from eight and four goal assists. Pedersen and Poi continued their good form aiding the transition down the court, whilst for the Magic, McPhee was a lone hand close to the post with six goals from eight attempts.

Bird ended the match with an impressive 33 goals from 44 attempts, but it was the work of Pedersen (17 goal assists from 34 feeds) and Selby-Rickit (12 from 19 on both goals and assists) who worked actively to keep the ball moving. In defence, Fakahokotau and Watson combined for five intercepts and two rebounds. In true Watson style, she only conceded one penalty for the entire match, while Fakahokotau won the Most Valuable Player (MVP) award for her work.

For the Magic, it was Souness who was the main source of transition ball with 17 assists from 31 feeds, and getting active off the centre pass with 19 receives. McPhee shot 21 goals from 26 assists, while her partner-in-crime Latu-Meafou sank 15 from 21. Aside from a terrific second quarter, the Magic faded away and it cost them in the end.