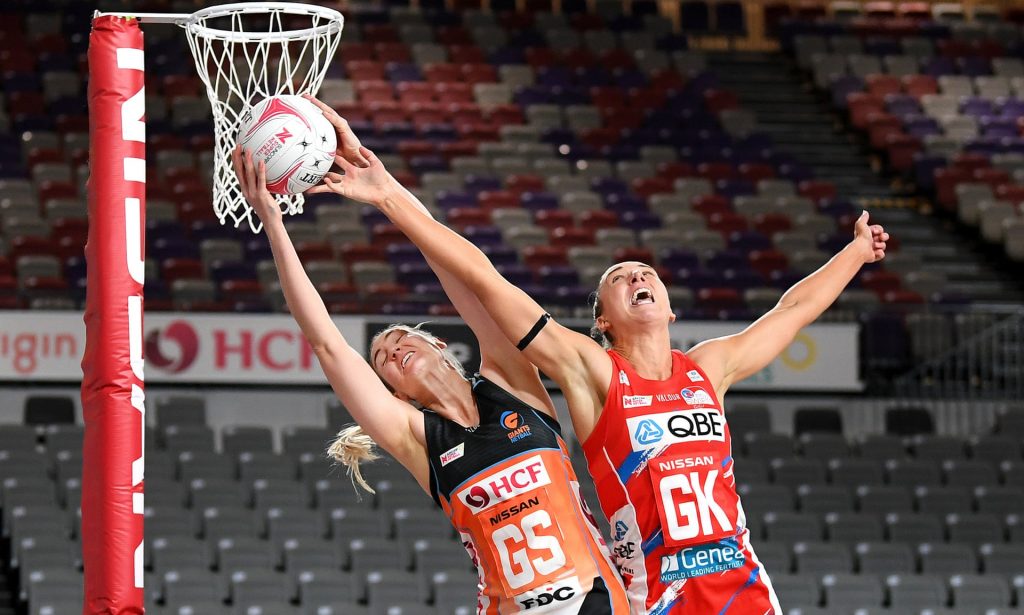 THE NSW Swifts had the perfect win to start their 2019 premiership defence, beating GIANTS Netball in a two-goal 63-61 nail-biter after trailing for much of the match. While the GIANTS had all the early momentum and well and truly took advantage of the two-goal super shot, the Swifts were cleaner and chipped back the margin throughout the remainder of the quarters to come away with the tight victory.

The Swifts were straight into it, forcing a held ball from the GIANTS to turn over the centre pass although a huge amount of crowding saw the GIANTS do the same to get one back and keep a step ahead. With Maddy Turner ruled out through injury Lauren Moore got her first start, while Maddy Proud made her long awaited return from injury and started well out in wing attack.

With clashing colours and plenty of intensity on and off the ball early, the GIANTS had the early ascendency with Kristiana Manu’a holding Helen Housby away from the contest and forcing the long ball in to Sam Wallace, while the attack for the GIANTS circle work proved influential with plenty of accuracy and the long preseason paying off. The Swifts’ defensive pressure down the court was immense, seeing a heap of turnover ball on the transition to GIANTS attack. The GIANTS circle work was impressive early with Caitin Bassett and Jo Harten highly accurate to post and finding plenty of avenues into the circle courtesy of Kiera Austin, who slotted into wing attack nicely.

Nat Haythornthwaite was injected midway through the term to give Proud a break and provided an immediate impact on the drive, finding the circle with ease. As expected, the final five minutes of the quarter saw Austin head to goal attack and Harten to goal shooter, while the Swifts kept up despite taking more short range attempts, whittling down the margin. The Swifts attack may have been more congested but with clever movement they took the front, with the GIANTS drawing even once more to be 17-all at quarter time.

An interesting start to the second quarter saw a heap of turnovers, with neither team really able to find a heap of purchase despite accuracy out the front. The low scoring affair saw an even contest with plenty of physicality and no player unwilling to go for the loose ball. The long ball into the goal circle seemed crucial, with both teams clogging up the goal third to limit access to circle edge and the easy feed into the circle.

Moore’s work rate was immense, with the young defender not letting up despite her impressive opposition while Manu’a was just as willing to put in the hard work to generate loose ball. Harten’s long bomb accuracy saw the GIANTS head into half up time up by five goals but the Swifts were still well and truly in the contest, with only Harten’s long shot really keeping the side in the lead and a few crucial passes flying over the goal line straight past Bassett on the lead.

The third quarter saw the GIANTS start well but the combination between Sarah Klau and Moore improved as the match went on, which was well and truly showcased with the side evening the ledger even with the GIANTS taking full control of the super shot. The duo did a heap of work to propel the ball back up the court, though Amy Parmenter continued to star through the middle third with her anticipation and cleanliness generating turnover ball. Both teams were willing to test each other, forcing turnovers and creating plenty of intensity around the ball with so much youth plying their trade defensively.

A couple of errors kept the goal margin at five, with the Swifts edging closer at times but unable to completely take control. Austin’s versatility was crucial, with the young talent plying her trade with ease and telly having an impact in both positions. But whatever Austin did Moore was in the mix, while April Brandley made her GIANTS debut rotating into goal defence and Jamie-Lee Price continued to assert her physicality on the contest in centre. The five minute mark saw the Swifts take the front, leading by three goals with just the last quarter to go.

The second half was all in the way of the Swifts, with the reigning premiers finding plenty of turnover ball prior to the super shot period which paid dividends once the quarters were into the final stages. While GIANTS were quick to take advantage once more when the super shot came was into effect, narrowing the margin, the Swifts were patient with ball in hand. With just over two minutes on the clock the GIANTS came within a couple goals but the Swifts’ work rate paid off, winning 63-61 in a hard fought battle and chipping the ball around in the dying moments to deny a win for the GIANTS.

Moore was announced player of the match with her five intercepts, three deflections proving she is more than capable of slotting into the Swifts lineup regularly, while Klau was consistent as ever with seven deflections (three resulting in a gain) and two intercepts down back. Haythornthwaite led the assists stat for the Swifts with 14 from 24 feeds while Proud was not far behind with 12 upon return, while Wallace topped the tally with 33 goals from 40 attempts including six super shots.

For the GIANTS, Parmenter was a star and did not skip a beat over the off-season, racking up a whopping seven intercepts to go with her seven deflections, and while the deflections did not result in gains her effort was instrumental denying ball to the Swifts. Bassett and Harten shared the shooting load with 22 and 21 goals respectively, though nine of Hartens shots counted for double points. Price racked up the assists with 16 and a gain, while defensively Sam Poolman starred early with three gains.