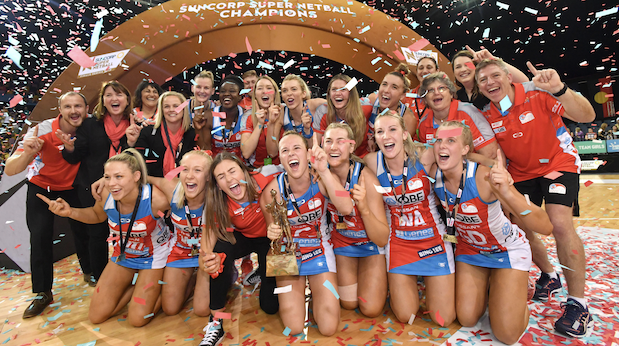 AFTER toiling away for the past three years and fine-tuning their line-up, the NSW Swifts struck gold in season 2019, overcoming a multitude of injuries to run out victorious against back-to-back premiers, the Sunshines Coast Lightning. In her second year as head coach at the Swifts Briony Akle sung the praises of her sides trouncing of Sunshine Coast.

“I don’t know where to go from here it’s just like we want to win this over and over again and the Swifts have a fantastic legacy and I think for us it’s about looking forward and celebrating this now and it starts all again in November,” Akle said.

Despite being ravaged by injuries with courageous captain Maddy Proud tearing her Anterior Cruciate Ligament (ACL) midway through the season, Kate Eddy sidelined with an ankle injury and both England Roses stars Nat Haythornthwaite and Helen Housby forced to the bench for large parts of the year the side stood up in the adversity with Akle enjoying every moment of their historic win.

“Proud, just amazing what we’ve been through all year and just to get to this point you know this is amazing lets celebrate it enjoy the moment,” Akle said. “These guys did that they just went out there and looked at the crowd and soaked it all in and finally we followed the game plan. “The old cliché 60 minutes but we did it so yeah very very proud.”

Akle took it all in her stride recruiting the likes of Silver Fern Katrina Rore and Sophie Halpin to replace the injured Eddy meanwhile putting faith in the likes of Tayla Fraser to try and fill the void of their injured captain. While it was hard to sit on the sidelines and watch, Proud could not be happier commending her side for their gallant efforts.

“I mean it’s hard to watch no one likes watching from the sideline but again the way they played today was just incredible and made me very very proud and even more eager to get out there next year,” Proud said.

Unable to participate in the Swifts finals campaign, Proud highlighted the persistence and tolerance of the playing group to be able to overcome the injury obstacles and run out victorious against a formidable opponent.

“I think like we said it’s been one of those years where we’ve had probably 15 players come in and out at any given time and we knew from the get go this was going to be a special year and how we got there was probably a bit more of a windy road than we thought it would be,” Proud said.

The Swifts climb up the ladder also shed a light on some serious talent with goal keeper Sarah Klau getting a call up to the Diamonds credit to her defensive pressure while Paige Hadley re-captured some form getting the nod in the green and gold after a couple of years. Coach Briony Akle had nothing but praise for the defender touting her skill and pressure as one of the key reasons for the Swifts emphatic win.

“Amazing,” Akle said. “I think I just got told she had 11 possession gains so a fantastic game for her, probably the best game I’ve seen her play. It was a great one to do it at.”

While the rise up the ladder took many onlookers by surprise, internally the Swifts had plenty of belief in their structures and players.

“I think we’ve been kind of building on this for a couple of years now and we’ve obviously had the ingredients for a few years now and today was the day we put it all together,” Proud said. “The Swifts have always been a team that you’ve looked up to, you feared playing the Swifts for as long as I’ve been playing which is a little while now, and now being able to recreate it with this group is very exciting. “As Briony said we hope this is only the beginning but we are going to enjoy this one for a little bit.”

Looking ahead to 2020, Akle has high hopes for her side which tasted its first bit success since 2008 despite making it to a couple of losing grand finals.

“I think the legacy of the Swifts is great and if we can keep this team together and get a few more of these trophies,” she said.