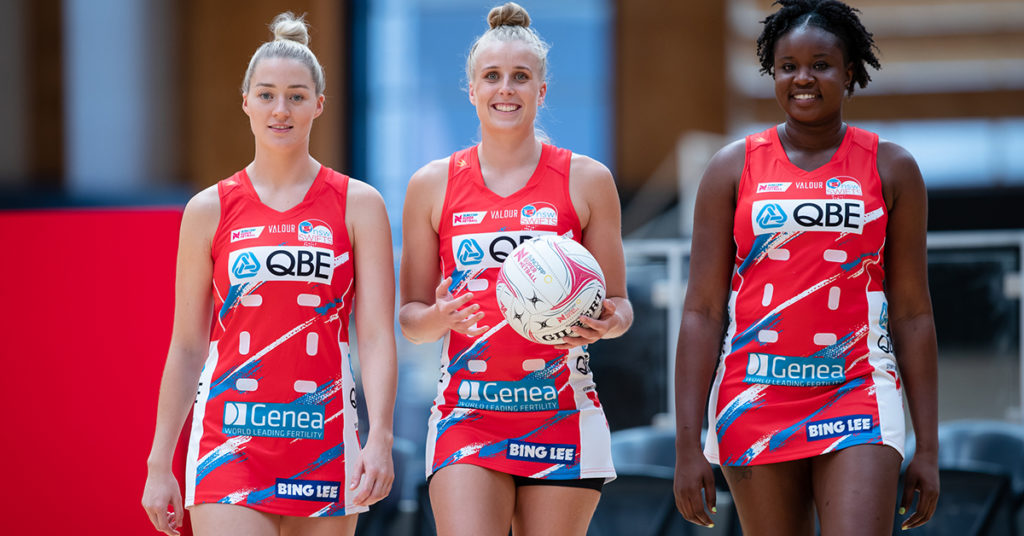 THE New South Wales (NSW) Swifts picked up where they left off last year in the Suncorp Super Netball, with a strong win against cross-ditch rivals Waikato Bay of Plenty Magic 54-66. It was relatively even for majority of the game before the Swifts ran away with it in the final term.

It was a hot start from the Swifts, bursting out of the blocks and quickly opening up a four goal to zip lead before the Magic found their feet. Their connections down the court were strong smoothly transitioning from attack to defence with ease and using a variety of speed to run the court. NSW opened up a seven goal lead midway through the quarter but the Magic drew it back to five at quarter time credit to their increased pressure. Roses captain, Nat Haythornthwaite was on fire in the opening 15 minutes showcasing her impressive balance on the circle edge and dynamic movement time and time again. Goal keeper, Sarah Klau continued her brilliant form strong on the rebound, and applying good aerial pressure picking off intercepts. Sam Wallace brought out the party tricks in the dying minutes of the quarter nailing a goal falling out of court and off balance. While the Swifts were hitting their straps, the Magic seemed to struggle in the goal circle with Abigail Latu-Meafou and Kelsey McPhee unable to find their range.

The Magic wrestled back the momentum in the opening stages of the quarter applying a heap of defensive pressure to deny any easy access into the goal circle and causing congestion in the attacking third. After a shaky start, McPhee built into the game with her strong hands on the take and ability to use her feet to open up space in the goal circle. The connection between Latu-Meafou and McPhee also started to develop with the two linking up in the goal circle and drawing the defender to leave the other open under the post. Up the other end, Georgia Tong lifted her work load in defence to cause confusion in the Swifts goal circle while new recruit Holly Fowler plied her trade in wing defence with her hands over pressure. Despite the increased pressure, Wallace remained the dominant shooter slotting them from everywhere in the circle. The contest between centres Paige Hadley and Sam Winders was one to watch with both players going toe-to-toe throughout the term to create attacking forays for their respective sides. Hadley was quick on her feet often receiving the ball on the fly and dishing off carefully crafted passes to deliver into Wallace and Helen Housby to gradually extend their lead 29-34.

With the lead in their favour the Swifts rung in the changes across the court after half time with Tayla Fraser coming on in centre and not skipping a beat. The speedster zipped around the court weaving in and out to re-offer on the circle edge. Housby moved to the bench making way for Sophie Garbin with the goal attack using her strength to full effect while the defensive end also had a shakeup with Sophie Craig (nee Halpin) moving into goal defence and Olivia Coleman donning the goal keeper bib. But the Swifts were not the only ones to tinker with the line-up with Erena Mikaere injected into the game. Mikaere used her body-on-body style of defence to full effect while also tracking the ball well swatting away a pass entering the circle credit to her three-foot marking and wingspan. Through the midcourt Ariana Cable-Dixon upped the ante using her change of direction and quick hands to deliver balls into the shooters. Overall it was a more even quarter with both sides going goal for goal for the majority but transition lacked fluidity for both sides.

After a strong third quarter performance, the Waikato Bay of Plenty Magic fell away in the fourth simply unable to match the Swifts depth on the bench and high level of endurance. NSW well and truly kicked it up a gear going on a scoring spree with Garbin and Housby pairing well in the goal circle to link up and create strong shooter-to shooter interplay. Garbin let loose with a couple of well-timed baseline drives while the entire Swifts line-up grew in confidence releasing long bombs into the goal circle unfazed by the Magic’s defence. The Magic emptied out their bench with Australian Georgia Marshall making her way onto the court in goal attack while Silver Ferns speedster Whitney Souness also got some court time using her drives to the top of the circle to open up space but it was a little too late unable to peg the margin back.